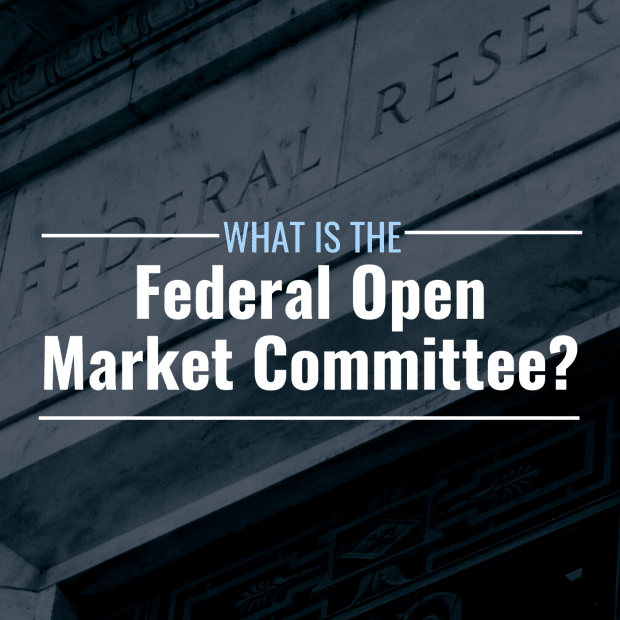 What Is the Federal Open Market Committee (FOMC)? How Does It Work?

The central bank of the United States is known as the Federal Reserve. While it operates independently of the federal government and has no political affiliation, it may be one of the most powerful committees in the world. The Federal Reserve, or the Fed, as it’s known for short, is responsible for ensuring a strong American economy and healthy levels of employment by managing fiscal policies.

Most people know the Fed as being synonymous with interest rates—particularly when they go up. But it does so much more than that.

There are three main things the Fed is responsible for:

Bank reserve requirements and interest rates are maintained by the Fed’s Board of Governors. Open market operations are overseen by its Federal Open Market Committee (FOMC).

How Is the Fed Structured?

The Fed is composed of three parts:

Who Serves on the Federal Open Market Committee? What Do They Do?

The FOMC is made up of a dozen members:

i) Boston, Philadelphia, and Richmond

When Does the FOMC Meet? When Is the Next FOMC Meeting?

The FOMC meets eight times per year. The rest of its 2022 meetings are:

To find out when its 2023 meetings will be scheduled, visit the FOMC’s calendar page.

Who Currently Serves on the FOMC?

Since 2018, Jerome “Jay” Powell has served as the Chair of the Federal Reserve. Fed Chairs serve four-year terms, although Powell was recently re-appointed and confirmed for a second term, which will expire in 2028.

The rest of the current FOMC members are:

What Is the Main Thing the FOMC Decides?

The FOMC monitors the U.S. economy nonstop. Every six weeks at its FOMC meeting, it presents its outlook and adjusts interest rates accordingly. However, these are not the interest rates people use when taking out a car loan or a mortgage—those rates follow the prime rate, which is set by their banks.

Rather, the FOMC sets the fed funds rate, which is a target rate of interest that banks use to lend money to each other. The Fed may raise or lower the fed funds rate as a way to encourage lending, curb inflation, or generally ensure a strong and healthy economy.

What Are FOMC Minutes? When Are They Released?

On the final day of the FOMC meeting, the Fed publishes a short policy statement. Three weeks later, it publishes a full set of meeting minutes. These records are publicly available and can be accessed via the FOMC's minutes archive.

How Does the FOMC Increase the Monetary Supply?

When the Fed lowers the reserve requirement for a bank, it effectively creates more liquidity in the financial markets, thus increasing the monetary supply. Its Treasury security buybacks also increase reserves, putting more cash back into circulation. After the 2007-2008 Financial Crisis, the FOMC began a series of quantitative easing measures, designed to keep interest rates low and help spur growth. These measures were kept in place through 2015, but after the COVID-19 pandemic caused the economy to briefly tailspin into a recession, the Fed once again began buying back Treasuries from March-June 2020, although critics contend these actions also helped spur inflation.

What Is the FOMC’s Inflation Forecast?

TheStreet’s Dan Weil believes that while Russia’s invasion of Ukraine will increase commodity prices, it wouldn't deter the Fed from raising interest rates at its March FOMC meeting. 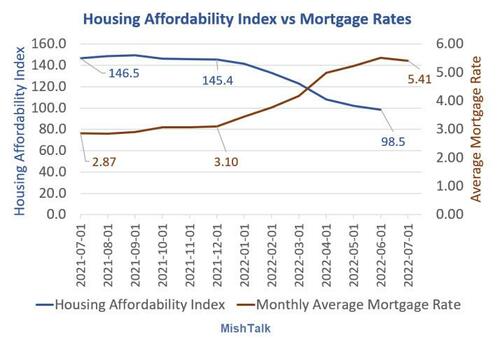 The National Association of Realtors says "affordability" dropped to 98.5 in June, the lowest since 1989.

Affordability in June Was the Worst Since 1989

It was more expensive to buy a U.S. home in June than it has been for any month in more than three decades, as record-high home prices collided with a surge in mortgage rates.

The National Association of Realtors’ housing-affordability index, which factors in family incomes, mortgage rates and the sales price for existing single-family homes, fell to 98.5 in June, the association said Friday. That marked the lowest level since June 1989, when the index stood at 98.3.

The NAR's Housing Affordability Index is based on median income data current  through 2017, projected forward.

Only 13 months of data is available on Fred, the St. Louis Fed repository.

Affordability is based on whether the median family earns enough income to qualify for a 30-year fixed mortgage loan on the median single-family home without spending more than 25% of the income on payment for principal and interest.

Inquiring minds may wish to look at the NAR's Housing Affordability Index Calculations.

Do you believe that? More importantly, even if accurate, so what?

The median person who can afford a home and wants a home probably already has a home.

In terms of new and existing home sales, what matters is what a buyer who does not have a home, but wants a home, is willing to pay and can pay.

68 percent is a much more reasonable number than the overall 98.5 percent calculation, but that still strikes me as too high.

I have not updated my full set of Case-Shiller home price charts for a while but that chart is current (May data).

Case-Shiller lags by a few months so it's even worse than shown.

Yet, the NAR says that median overall affordability has declined only to the 98.5 percent level. Yeah, right.

Meanwhile, rent and food keep rising and the price of rent will be sticky. Gasoline is more dependent on recession and global supply chains.

Food Prices Rise Most Since February 1979

For more on the price of food, please see Food at Home is Up 13.1 Percent From a Year Ago, Most Since February 1979

Here is a look at the change in teen employment over time.The graph below shows the employment-population ratio for teens (6 to 19 years old) since 1948.The graph is Not Seasonally Adjusted (NSA), to show the seasonal hiring of teenagers during the sum… 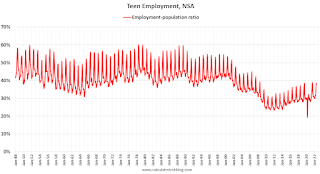 Here is a look at the change in teen employment over time.

The graph below shows the employment-population ratio for teens (6 to 19 years old) since 1948.

The graph is Not Seasonally Adjusted (NSA), to show the seasonal hiring of teenagers during the summer.

A few observations:
1) Although teen employment has recovered some since the great recession, overall teen employment had been trending down. This is probably because more people are staying in school (a long term positive for the economy).

2) Teen employment was significantly impacted in 2020 by the pandemic.

Braxia and KetaMD, CEOs McIntyre and Gumpel Speak on Acquisition

Last week, the Canadian company Braxia Scientific acquired 100% of the issued and outstanding stock of KetaMD, Inc. This is an exciting acquisition, and… 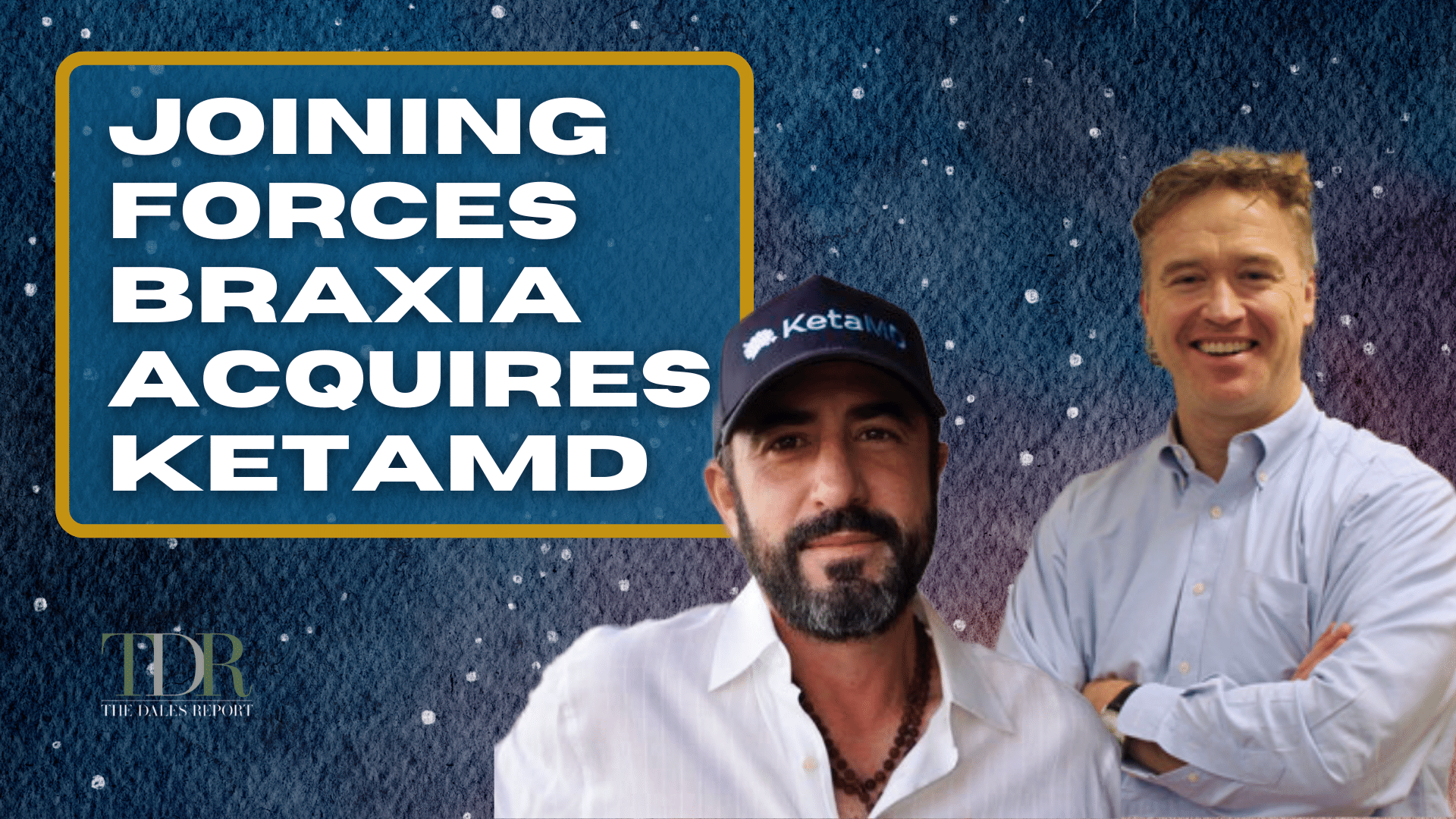 Last week, the Canadian company Braxia Scientific acquired 100% of the issued and outstanding stock of KetaMD, Inc. This is an exciting acquisition, and in today’s interview, The Dales Report’s Nicole Hodges talks with CEOs Dr. Roger McIntyre and Warren Gumpel of Braxia Scientific and KetaMD respectively.

For some background information, KetaMD is a U.S. based, privately-held, innovative telemedicine company, with a mission to address mental health challenges via access to technology-facilitated ketamine-based treatments. Braxia Scientific is Canada’s first clinic specializing in ketamine treatments for mood disorders. They recorded revenue of $1.49m for 2022 fiscal year, ended March 31. On a year-over-year basis, revenue increased 47.5%.

Here’s some highlights from the interview.

Dr. McIntyre says that KetaMD gives Braxia what they’ve had as their vision from the beginning: a US presence. KetaMD is a living program. It’s already running, has infrastructure, and patients. McIntyre believes that a program like KetaMD is something Braxia’s needed to scale and obtain commercial success.

With telemedicine, Braxia has a potential to serve a gap in access. The zeitgeist of “patient going to medicine” has flipped, McIntyre says. “Now it’s medicine goes to the patient, and that is long overdue.”

COVID speeding a trend that was already happening

In 2020, 80% of physicians indicated they had virtual visits. That’s a number up from 22% the year before. But this is something that many doctors, McIntyre included, believe always should have happened. The pandemic only was the catalyst for innovation and making the option viable.

While some treatments will always need a clinic or a hospital, McIntyre believes some treatments can be done safely at home. And they are, for many chronic diseases. He feels implementing ketamine and psychedelics would be among these treatments where service could be expanded into the home. It would require careful SOPs in place, best practices, and surveillance. But he believes Braxia Scientific could deliver this with KetaMD.

Gumpel to stay as CEO of KetaMD

Gumpel says that KetaMD benefits in this acquisition from being part of the world’s most prominent researchers in depression, psychedelics, and ketamine. In the acquisition, he’ll stay on as CEO. He admits that Dr. McIntyre has been a huge part of collecting the data on the safety of ketamine treatment, and has a strong motivation to “see this thing through until most of society can access that – or at least the people that need it and want it.”

Gumpel admits he has a personal connection to ketamine treatment. As a person who has experienced bouts of depression for years, it saved his life, he says. He is grateful he was living within walking distance of ketamine treatment in Manhattan. It made him extremely aware of the accessibility gap, which in part inspired KetaMD.

Be sure to tune in for the full interview regarding Braxia and KetaMD, right here on The Dales Report!

The post Braxia and KetaMD, CEOs McIntyre and Gumpel Speak on Acquisition appeared first on The Dales Report.

How Inflation Impacts Penny Stocks and the Stock Market

Braxia and KetaMD, CEOs McIntyre and Gumpel Speak on Acquisition

How to Use Dividends to Find the Best Tech Stock

Cities That Lost and Gained the Most People in the Pandemic