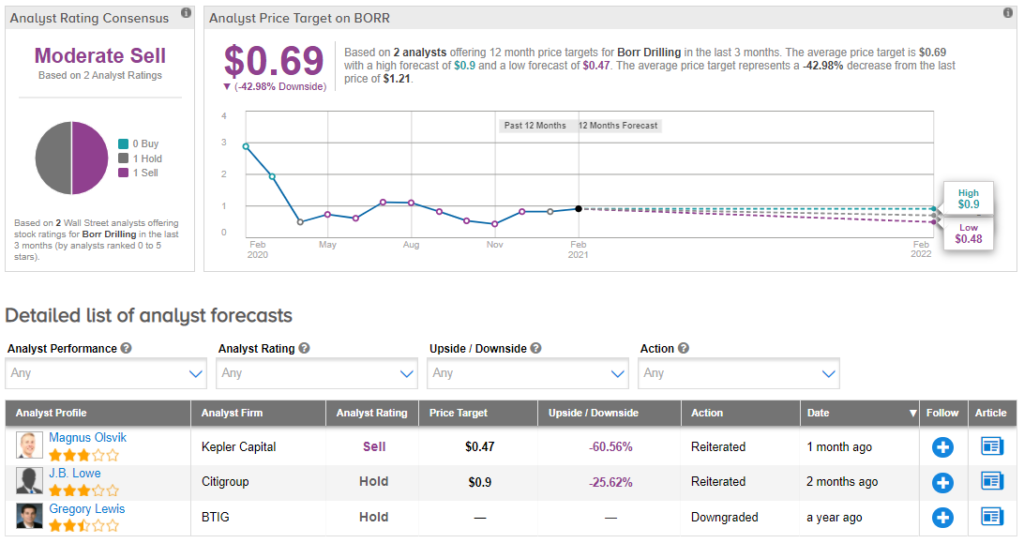 Last year was among the worst years for the energy sector. The global recession triggered by the novel coronavirus ensured that oil prices remained depressed. However, in 2021, a turnaround seems imminent.

2020 saw global GDP contract by 3.5%. Looking ahead, the International Monetary Fund expects the world economy to grow 5.5% in FY2021, and economic expansion is likely to persist in FY2022. With gradual demand recovery, oil has been trending higher.

The offshore drilling sector has been hit hard by the downturn, but one company that looks poised for a strong turnaround is Borr Drilling (BORR). In the last month, BORR is up 38% and currently trades at $1.21.

It’s very likely that the stock will continue to trend higher in the coming quarters. Let’s talk about some factors that support this bullish view.

As a quick overview, Borr Drilling has a fleet of 23 premium jack-up rigs that have been built on or after FY2011. In addition, the company has five rigs under construction.

It should be noted that the company has no debt amortisation through FY2023. In addition, the scheduled delivery of new rigs has been deferred to FY2023. Clearly, BORR’s credit stress has declined significantly.

This comes at a time when the industry is showing early signs of recovery. If the company delivers positive cash flows in the next few quarters, the balance sheet is likely to further improve.

For the first nine months of 2020, the company reported cash used in operations of $16.3 million, compared to cash used of $89 million for the prior-year period. Therefore, the company has reduced the cash burn significantly, and expansion in EBITDA margin and positive OCF is very likely in FY2021 as rig day-rates gradually improve.

In terms of financial flexibility, the company reported book value for jack-up drilling rigs of $2.8 billion for Q3 2020. For the same period, the long-term debt was $1.9 billion. This implies a loan-to-value of 67.9%. So, once there is sustained industry recovery, Borr Drilling will be positioned to leverage for growth.

Speaking to the early signs of recovery, Borr Drilling has put four warm stacked rigs to work since Q2 2020. In addition, the company currently has 19 invitations to tenders and direct negotiations. This is likely to translate to new contracts for warm stacked rigs.

It’s also worth noting that the modern jack-up rigs have a higher probability of securing contracts versus the standard jack-ups, and thus, the company has a young fleet that’s well positioned to secure contracts.

Another point to consider is that most of the contracted rigs have a relatively short contract duration. If oil remains at higher levels, exploration companies will award longer duration contracts. This will boost the company’s cash flow visibility.

Turning to Wall Street, 1 Hold and 1 Sell have been assigned in the last three months. So, BORR is a Moderate Sell. Based on the $0.69 average analyst price target, shares could drop 43% in the year ahead. (See Borr Drilling stock analysis on TipRanks)

BORR stock has been trending higher recently, and the upside has been supported by capital raising coupled with a positive industry outlook.

As of January 2021, the company had $126.8 million in order backlog. This is likely to ensure revenue visibility for the next few quarters. That said, it remains to be seen if long-term orders can be secured in the next few months, but the probability is high with Brent trading at $65 per barrel.

Therefore, fresh exposure to the stock can be considered at current levels as the small-cap has the potential to be a portfolio catalyst.

Disclosure: On the date of publication, Faisal Humayun did not have (either directly or indirectly) any positions in the securities mentioned in this article.

Disclaimer: The information contained herein is for informational purposes only. Nothing in this article should be taken as a solicitation to purchase or sell securities.

Furlough scheme: UK has to extend it, but there are serious risks