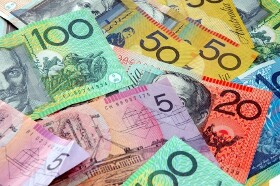 The Australian dollar held its ground today despite waning optimism about the coronavirus vaccine. Domestic macroeconomic data released in Australia on Wednesday was not great but not terrible either.

The Australian Bureau of Statistics reported that the Wage Price Index rose by 0.1% in the September quarter from the previous three months. Analysts were expecting the same 0.2% rate of growth as in the previous quarter. Year-on-year, the index rose by 1.2%.

The six-month annualized growth rate in the Westpac-Melbourne Institute Leading Index, which shows the likely pace of economic activity relative to trend three-to-nine months into the future, rose from –0.47% in September to 3.25% in October. While the increase was very big, the report explained that it is largely because of how bad the economic conditions were previously:

This is the first positive, above trend, growth rate since November 2018. It is also the strongest seen since the early 1980s. That said, it mainly reflects the severity of the preceding contraction which saw the index growth rate drop to an extreme low of –5.5% in April. Indeed, the level of the Index has still not fully recouped the sharp decline seen during COVID lockdowns earlier in the year.

Yesterday, the Reserve Bank of Australia released minutes of its November monetary policy meeting. The notes showed that policymakers basically ruled out an interest rate cut into the negative territory:

Members agreed that, with the cash rate target at 10 basis points and the interest rate on Exchange Settlement balances at zero, interest rates would have been lowered as far as it made sense to do so in the current environment. They considered that there was little to be gained from short-term interest rates moving into negative territory and continued to view a negative policy rate as extraordinarily unlikely.

Nevertheless, the central bank signaled that it is ready to do what is necessary to support the economy:

The Board is prepared to do more if necessary.