Asian equity markets mostly ignored the sharp rally in US index futures yesterday morning, but with the rally consolidating in OTC markets in the US and Europe overnight, Asia feels confident about dipping its toes in the water today, although the gains are not universal. On Wall Street, investors unwound much of Friday’s sell-off drama, and despite the tenuous reasoning behind the move, always respect momentum.

After a stunning downside reversal late in the Tokyo session as the government banned entry to all foreigners, the Nikkei 225 is doing what it does best today, following the Nasdaq. Softer Industrial Production data has tempered the gains, but the Nikkei 225 is still 0.60% higher. However, South Korea’s Kospi is 1.05% lower after the government shelved plans to relax Covid-19 restrictions, highlighting once again, what is really driving markets right now. Meanwhile, mainland China markets have edged higher, the Shanghai Composite and CSI 300 rising by just 0.15%. The casino sell-off persists in Hong Kong today, the latest sector in the Chinese government spotlight, leading the Hang Seng to shed 1.20%.

Across the region, Singapore is unchanged, unable to shake off PM Lee’s comments that Covid-19 freedoms could be rolled back if necessary. Kuala Lumpur though has risen by 0.55%, with Jakarta rising by 0.40% and Bangkok climbing 1.05% as investors build a tourism premium back in once again. Manila has fallen 1.0% while Taipei has rallied by 0.80%. Australian markets, never short of herd-like optimism or a proclivity to slavishly follow Wall Street, have rallied strongly. The All Ordinaries is 1.10% higher, while the ASX 200 has risen by 0.80%.

European markets reclaimed some losses overnight, and the price action in Asia will likely inspire more buying initially. The same is likely on Wall Street as the pull of the FOMO remains irresistible. I would caution, however, that we are just one negative omicron headline from the whole rally everywhere, evaporating into thin air.

According to sources familiar with the matter, the Wall Street Journal reported that Pfizer Inc (NYSE: PFE) was in advanced discussions to acquire pharmaceutical… 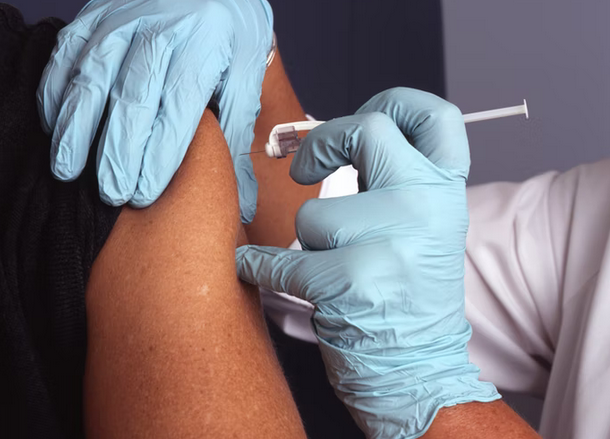 According to sources familiar with the matter, the Wall Street Journal reported that Pfizer Inc (NYSE: PFE) was in advanced discussions to acquire pharmaceutical company Global Blood Therapeutics (NASDAQ: GBT) for $5 billion.

Pfizer wants to close a deal soon, but there are still other interested parties, according to the article.

Global Blood Therapeutics, which manufactures Oxbryta, the blood disorder medication, saw its shares jump 44%  on Friday afternoon to a two-year high. As of Thursday’s closing, the company’s market cap was $3.12 billion.

A spokesman for Global Blood stated the company does not “comment on market rumors or speculation,” while Pfizer declined to respond on the matter.

With plenty of cash left over after selling its COVID-19 vaccine, New York-based Pfizer is searching for deals that may generate billions of dollars annual sales by 2030.

Its $11.6 billion acquisition of migraine medication manufacturer Biohaven Pharmaceutical Holding (NASDAQ: BHVN) in May was the most recent in a series of purchases that also included Trillium Therapeutics and Arena Pharmaceuticals in recent years.

In 2019, the US government approved Global Blood’s Oxbryta to manage sickle cell disease in individuals aged 12 and over. The oral medication was approved in December 2021 to treat the illness in younger children. The drug’s sales increased by almost 50% to $194.7 million in 2021.

After a gloomy start to the calendar year, when a lack of significant purchases and clinical-stage treatment failures lowered investor morale and restricted funding, the biotech dealmaking pace has recently picked up again.

Also, Amgen Inc (NASDAQ: AMGN) also decided to purchase ChemoCentryx Inc on Thursday for $3.7 billion to obtain access to a possible breakthrough medication for inflammatory illnesses. AstraZeneca’s $39 billion acquisition of Alexion Pharmaceuticals in 2020 has put the realm of immune diseases in the limelight. The deal, which was announced before trading opened, will also give the corporation control of at least two investigational immune disorders medicines.

Please make sure to read and completely understand our disclaimer at https://www.wallstreetpr.com/disclaimer. While reading this article one must assume that we may be compensated for posting this content on our website.

AEMD: Positive Results in a Range of Conditions, Including COVID-19 & Monkey Pox 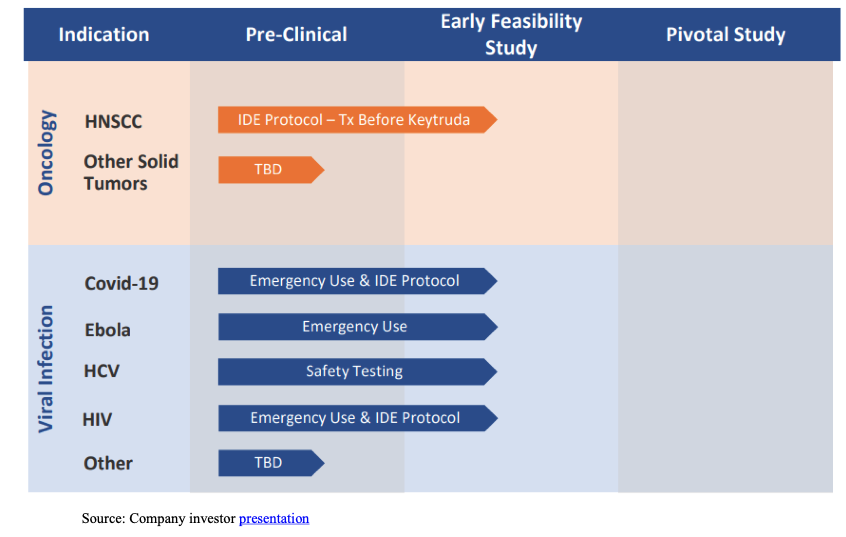 Aethlon Medical's (NASDAQ: AEMD) clinical trials are moving forward and expanding, as AEMD continues to demonstrate the effectiveness of its lead product, the Aethlon Hemopurifier®, in a broad range of viruses and conditions in single patient emergency use cases and in in vitro analysis, including COVID-19 and various variants and Monkey Pox, among others. The Aethlon Hemopurifier® is being studied in a severe COVID-19 clinical trial under the company's open IDE (Investigational Device Exemption) for life-threatening viral infections.

The safety and feasibility of the Hemopurifier is being evaluated in an Early Feasibility Study (EFS) that will enroll up to 40 COVID-19 ICU patients. The first patient was enrolled in this study in June 2022 and has completed the Hemopurifier treatment. AEMD has nine fully activated hospitals that are actively screening patients for the trial.

In addition to this study, the Hemopurifier has demonstrated positive results in two severely ill patients under individual emergency use and in in vitro analysis. The Hemopurifier has produced positive results in binding seven variants of the SARS-CoV-2 (severe acute respiratory syndrome coronavirus 2) virus in vitro, as discussed in an article1  that AEMD's CEO Dr. Charles J. Fisher Jr. and the company's Chief Medical Officer Dr. Steven LaRosa contributed to.

The company is also conducting a study of the impact of the ... 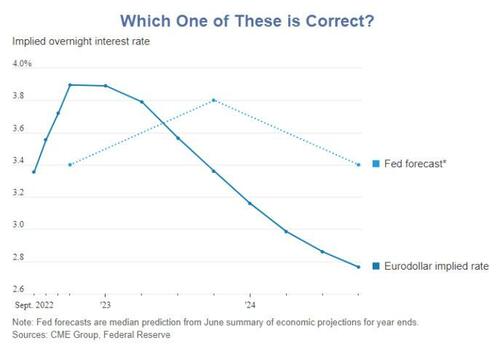 Data from CME and Fed via Wall Street Journal.

The eurodollar curve has nothing to do with euros or dollars. Rather it is an interest rate curve and one of the world's most widely traded futures.

After peaking at about 3.9% this year, eurodollar betters believe the Fed will then cut rates all the way down to 2.8%.

In reference to the led chart, Macintosh says "The first assumption is the hardest to believe."

I disagree. The hardest thing to believe is the overall goldilocks scenario and that the current rally makes any sense at all.

Inflation may easily come down if the Fed tightens too much too fast causing a severe recession. What would that do to corporate profits?

But assume otherwise, that inflation does not come down more. What would that do to corporate profits?

While any of the first three points may easily be correct, the combination of all five being correct and that stocks will rise in a goldilocks scenario is what I find hard to believe.

Is the Market Forward Looking?

Goldilocks proponents will tell you that the market is forward looking.

The market isn't forward looking and never was. It is a coincident indicator of current sentiment, wildly wrong at major turns.

If the market was forward looking, what precisely was it looking forward to at the November 2007 peak with recession starting the next month?

The Fed Will Hike Until It Breaks Something

I believe the eurodollar curve is more likely to be correct than the Fed. When has the Fed gotten much of anything correct?

The eurodollar view has two ways to win. The first is the Fed actually does tame inflation to the degree that it wants.

That's possible in a severe enough recession. And the global picture is easily weak enough for that to happen.

The second way the eurodollar curve might be correct is if the Fed breaks the credit market.

The Fed would immediately reverse course, regardless of inflation, should that happen.

Neither a credit event nor strong recession would be good for the stock market.

The least likely thing is that the Fed achieves a goldilocks soft landing. Yet, assume that happens.

Macintosh says, and I agree, "The bull case that stocks and corporate bonds are pricing requires the combination of low joblessness and wage rises to allow spending to rise faster than inflation even after pandemic savings run out. But not so much faster that it hits capacity constraints and accelerates inflation."

The problem with goldilocks is stocks are priced so much beyond perfection that they may decline anyway.

Good luck with goldilocks, especially with the Fed still hiking.

How Long Will This Recession Last?

If This is a Recession, It’s a Pretty Weird One

This Unexpected Stock is the Real 5G Winner