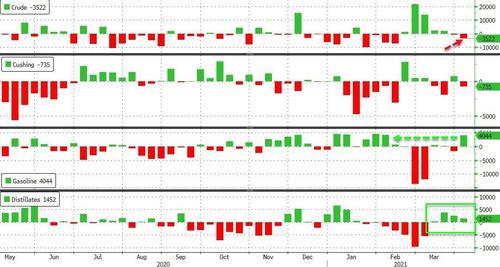 “For the oil market to recover, the world needs further progress in fighting the pandemic, a slowing infection count and a gradual withdrawal of lockdowns and restrictions.,” said Louise Dickson, an oil markets analyst at Rystad Energy AS.

This northern-hemisphere summer, “vaccination campaigns are expected to reach a satisfactory initial level to allow a gradual return to social normality.”

So, all eyes are now on the official government stockpile data to offer clues on the health of American consumption after the world’s largest economy posted a string of positive economic figures.

Analysts expected a second weekly draw in crude stocks and official data showed a bigger draw than expected. After API reported major builds in gasoline and distillates stocks, the official data confirmed a big gasoline build and the 4th weekly build in distillates in a row...

WTI hovered around $59.00 ahead of the official data and was hugely unchanged after...

For now, pockets of the oil market continue to look weak. Russia’s flagship Urals crude traded at its lowest level in a year on Tuesday, as European markets lagged behind the rest of the world in the recovery from Covid-19.

Bloomberg Intelligence Senior Energy Analyst Vince Piazza says: "Global crude demand remains threatened by Covid-19, with rising cases in some markets and the emergence of vaccine-resistant strains casting shadows on economic recovery at least in the near term."