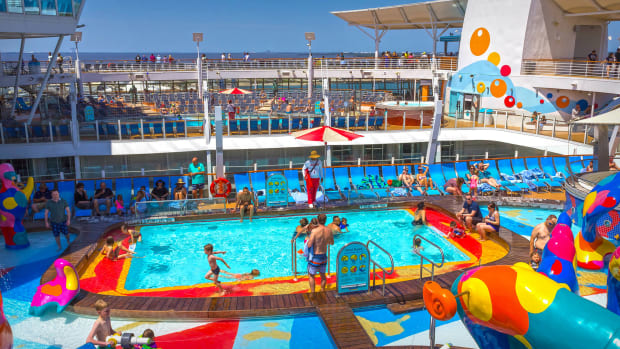 The cruise line isn't solely focused on competing with Carnival and Norwegian. It wants to take on land-based travel options.

While it's easy to see the major cruise lines as battling with each other for the dollars being spent by customers looking to take a cruise, that's not how Royal Caribbean (RCL) - Get Royal Caribbean Group Report CEO Jason Liberty views the marketplace. Certainly, the segment of people who already like to cruise might be picking between Liberty's company, or key rivals Carnival Cruise Lines (CCL) - Get Carnival Corporation Report, or Norwegian Cruise Line (NCLH) - Get Norwegian Cruise Line Holdings Ltd. Report.

Another group of travelers -- a much larger group -- does not think cruise first when it comes to a vacation. Instead, they book land-based vacations and that's an area where Liberty thinks Royal Caribbean can make big gains.

It's not about wooing customers away from its rivals, Liberty wants to bring more customers into the cruising tent. That would be good not just for Royal Caribbean, but also for Carnival and Norwegian.

"Pre-COVID, the combination of things like Perfect Day, you can add things like the edge-class ships and so forth, we saw a pretty significant reduction in that gap to land-based vacations, especially in key products like in Orlando and other products that are out there. And I think that we very much are focused on that," he said.

Liberty explained that many of Royal Caribbean's investments have been about building that value for vacationers.

We have really managed to enhance the experience, both on the ship and on land-based on really tuning into the customer for us to be able to go ahead and do that. So I think that's why we are seeing similar trends. But when you look at the overall fleet as a whole and you compare those to land-based vacation in Europe or you look at a land-based vacation in Alaska or Vegas, etc., there's still that gap and there's still that opportunity that we're very honed in on. I mean, that's really where, if you saw us pre-COVID or during COVID where we have focused our energy, is less about our cruise peers, but more about how do we close those gaps to land-based vacations.

The CEO never mentioned Walt Disney (DIS) - Get Walt Disney Company Report or any other competitor by name, but it seems clear what he's broadly talking about. A cruise can offer tremendous value compared to a theme park trip or a Las Vegas vacation due to the mostly all-inclusive nature of a cruise. That's a value proposition Liberty seems to want to lean into.

Would a Recession Hurt Royal Caribbean?

The cruise industry has just begun to normalize after its long pandemic shutdown and its slow return to normal. Royal Caribbean, Carnival, and Norwegian all added to their debt during this period (it's pretty hard not to when you're shut down for over a year).

Liberty made it clear that he's not overly worried about the prospect of an economic downturn because he believes in his company's value proposition.

"So when a consumer -- let's just say, if they are feeling a level of pressure and they still need and want to go on vacations and build experiences and memories. And I think that value differential, which we are every day doing all we can to close that gap, is one in which the consumer recognizes and that tend to kind of fare well relative to other travel or consumer discretionary products during times like that," he said.

And just to add quickly. We are in a very strong liquidity position," he said. "We're obviously in this inflection point of free cash flow -- of operating cash flows. And our focus is, as I said in my remarks, is to continue to refinance the balance sheet."

Macro and Prices: Sentiment Swings Between Inflation and Recession

From CoStar: STR: Weekly US Hotel Revenue per Available Room Reaches Highest Level Since July 2019U.S. hotel performance increased from the previous week, according to STR‘s latest data through May 21.May 15-21, 2022 (percentage change from comparable … 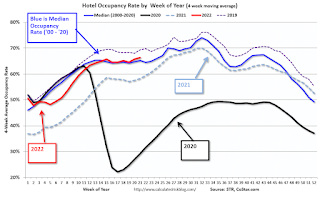 U.S. hotel performance increased from the previous week, according to STR‘s latest data through May 21.

*Due to the pandemic impact, STR is measuring recovery against comparable time periods from 2019.
emphasis added

The following graph shows the seasonal pattern for the hotel occupancy rate using the four-week average.

The red line is for 2022, black is 2020, blue is the median, and dashed light blue is for 2021.  Dashed purple is 2019 (STR is comparing to a strong year for hotels).
The 4-week average of the occupancy rate above the median rate for the previous 20 years (Blue).
Note: Y-axis doesn't start at zero to better show the seasonal change.
The 4-week average of the occupancy rate will mostly move sideways seasonally until the summer travel season.
recovery pandemic 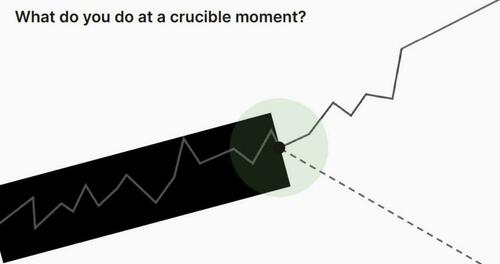 "This is not a time to panic. It is a time to pause and reassess," begins the thought-provoking presentation from veteran venture capital firm Sequoia Capital.

But that's about as 'positive' as they get as the founders of the firm warn of a prolonged market downturn and urges the startups in its portfolio to preserve cash and brace for worse to come.

"We believe this is a Crucible Moment, one that will present challenges and opportunities for many of you. First and foremost, we must recognize the changing environment and shift our mindset to respond with intention rather than regret."

And in its somewhat ubiquitous historically grim outlooks (its "R.I.P Good Times" in 2008 and "Black Swan" memo in March 2020 have become legendary) don't expect a quick rescue and recovery this time.

"Sustained inflation, and geopolitical conflicts further limit the ability for a quick-fix policy solution. As such, we do not believe that this is going to be another steep correction followed by an equally swift V-shaped recovery, like we saw at the outset of the pandemic," the note said.

They argue that it will be "Survival of the Quickest"...

In particular, Sequoia urged companies to look at cutting projects, R&D, marketing, and other expenses, noting that companies should be ready to cut in the next 30 days.

"We expect the market downturn to impact consumer behaviour, labour markets, supply chains and more. It will be a longer recovery and while we can't predict how long, we can advise you on ways to prepare and get through to the other side," it said.

The founders/CEOs who face reality, adapt fast, have discipline rather than regret will not just survive, but win, noting that "It is easier to preserve cash when you have more than six months left. Recruiting is about to get easier. All the FANG have hiring freezes."

They conclude their presenttation by noting that:

"At Sequoia, we believe that the one who wins is the one most prepared."

In other words America, brace for capex cuts, hiring freezes to accelerate, and growth to evaporate.

Read the full presentation below:

A week ago, following dismal guidance by Walmart,… 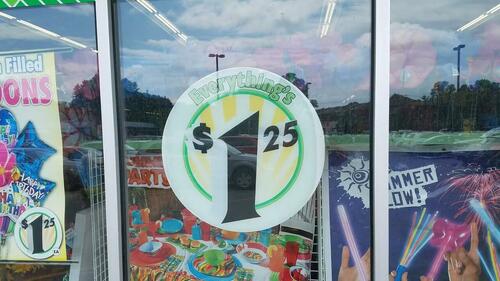 A week ago, following dismal guidance by Walmart, Target indicated that it is seeing a shift in the consumer wallet away from the pandemic purchases and into reopening purchases - including apparel - and the pace of this shift caught some retailers off guard on inventory. WMT, COST, and TGT all saw their stocks fall sharply last week as investor concerns around a US consumer slowdown mounted and investors reconsidered just where, if anywhere, you can play "defense" in the current market.

Which isn't surprising: as we discussed in "Middle Class Is Shutting Down As Spending By The Rich Remains Robust" when consumers are trading down - as they are doing now due to Biden's runaway inflation - dollar stores see more business.

As a result, Dollar Tree surged as much as 20% on Thursday, the biggest intraday move since October 2020. Evercore ISI said Dollar Tree's move to a "$1.25 price point" last November from $1 “came in the nick of time" adding that "given the broad-based inflationary cost pressures, the 25% price increase drove material sales and margin upside for both the namesake division and the total company," wrote analyst Michael Montani who also said that while freight, transport, and labor headwinds are real, some of the pressure cited by Target last week was likely company specific.

The analyst concluded that the read-across from DG and DLTR is “favorable,” and it seems that the low-end consumer is “hanging in better than initially thought.” Or rather, the middle-class is getting crushed and it has no choice but to trade down to the cheapest retail outlets.

And with countless shorts having piled up and getting massively squeezed, the S&P 500 Consumer Discretionary Index today has risen as much as 5.6%, its best day since April 2020, as optimism on the health of the consumer returns following a string of better-than-expected earnings reports from retailers.

Top performers in the S5COND index include Dollar Tree, Dollar General, Norwegian Cruise, Caesars Entertainment and Carnival; the Discretionary Index is on pace for its best week since March 18, when the group climbed 9.3%; the index sank 7.4% as Walmart and Target reports spooked investors. The index is still down almost 30% YTD.

"Retail earnings are bullish.... with four blow-outs,” said Vital Knowledge’s Adam Crisafulli, referring to quarterly reports from Williams-Sonoma, Macy’s, Dollar General, and Dollar Tree.  “The overall retail industry is experiencing stark changes and the market is incorrectly conflating these shifts with underlying demand weakness when the actual health of the consumer is much better than it seems,” Crisafulli says, although there are many - this website included - who wholeheartedly disagree with his optimistic view of the US consumer.

Remarkably, thanks to today’s rally, even Burlington Stores, which sank as much as 12% in premarket on disappointing results, is trading up as much as 11% and some say, the rally helped reverse the earlier tumble in NVDA shares.

The discretionary group is also getting a boost from airline operators Southwest and JetBlue, helping travel-related names, while on the economic front, better-than-expected personal consumption (for the revised Q1 GDP print). and jobless claims may be adding to the bullishness according to Bloomberg.

Cox Automotive Forecast: May Auto Sales Expected to Fall to Slowest Pace in 2022

Middle East container ports are the most efficient in the world

Another Month Closer To Global Recession

5 Top Penny Stocks For Your Watch List In June 2022