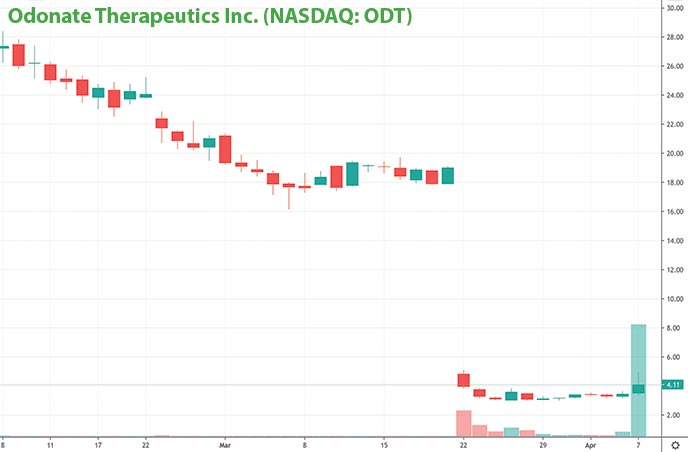 Are you making a list of penny stocks for the month? You might want to have some biotech names on it. This has become one of the most active sectors traders have put money in this year and for a good reason. Aside from the obvious implications that coronavirus treatment and presentation have had on biotech companies, many are developing novel treatments. Many of these treatments are designed to address unmet medical needs.

So when you talk about early-stage, biotech penny stocks are one of the truest forms. Is there a high risk? Of course, but that doesn’t come without the potential for high reward. One big finding in a phase trial can turn up the heat in a big way. Just look at companies like Novavax (NASDAQ: NVAX) or Greenwich LifeSciences (NASDAQ: GLSI) over the last year.

Both were traded as penny stocks at one point in 2020. Since then, NVAX stock reached highs of $331.68, and GLSI hit $158.07. Novavax’s move came over the course of several months. While Greenwich spiked up and dropped last year, this year has seen a bit more consistency in its trend.

Regardless of these moves, one thing holds for both. They were “emerging stage biotech companies” that scored big after key data was released. Now they are no longer penny stocks. But this clearly demonstrates how quickly things can change with trial results.

Are all penny stocks with exposure to biotech these big breakout names? No, but more times than not over the last year, we’ve seen cheap stocks explode after companies report big news. Many have also stayed well above the $5 threshold of the penny stock definition. Whether it was a cancer treatment stock or one working on gene therapy, the biotechnology sector remains a core focus in the stock market today. Let’s take a look at four trending stocks today that could be worth watching in April.

This has quickly become one of the more active penny stocks to watch for April. Odonate was something that we discussed earlier this week in light of recent market momentum.

Just like updates can trigger huge moves higher, they can also become a source of a massive sell-off. This was the case for Odonate a few weeks ago. The company went as far as saying it would wind down operations after discontinuing its tesetaxel platform for breast cancer treatment. Apparently, the clinical data for tesetaxel was “unlikely to secure approval” from the FDA, according to management.

As the market watches and waits, ODT stock has begun to reclaim some of the large losses incurred in March. It reached lows of $3.02 and now managed to bounce back as much as 64% reaching highs of $4.97 on Wednesday. But without any further news to point at, sentiment has likely begun playing a bigger role.

Another one of the biotech penny stocks that have pulled back over the last few months is Qilian International. The company IPOed earlier this year and ended up reaching a high of $22. Since then, it’s been a slow and steady slide back to lows of $4.20. This week, however, the market in QLI stock has woken up with trading activity at some of its highest levels since February. The penny stock also broke above $5 briefly on Wednesday. There weren’t any major headlines to mention associated with the move.

Is it just a move in sympathy with other biotech stocks today? For some context, Qilian is a pharmaceutical and chemical product manufacturer. Its main focus is on licorice products, oxytetracycline, and traditional Chinese medicine derivatives, among other things. Its licorice, oxytetracycline products, and traditional Chinese medicine products generated $32.6 million for its year ended September 2020. The company was also able to record a gross margin on these of 23.3%.

Qilian is also working on the expansion of its organic fertilizer arm. It completed the first phase of this plan in February, with production expected to begin last month. I mention this because in its financial update a few months ago, the company said it’s aiming to triple its production capacity. While no new updates have surfaced, the recent boost in trading action could be something to follow if QLI is on your list of penny stocks to watch right now.

One of the more frequently discussed biotech penny stocks to watch over the last few months is Iterum. If you look at the chart, ITRM stock gapped down aggressively in October but has since filled the gap and continued higher.

Why did ITRM stock drop? Iterum announced a multi-million-dollar funding round at a steep discount. Fast-forward to this year, and ITRM has reached highs of $3 and currently sits above $1.60 following the slide in biotech in March.

Right now, traders seem to be following the progress of its treatment pipeline. The company’s focus is on oral and IV antibiotics for infections caused by multi-drug resistant pathogens. Its lead treatment, sulopenem, is being studied in the treatment of uncomplicated urinary tract infections. Furthermore, a New Drug Application was filed in Q4 with the FDA. The review process has a Prescription Drug User Fee Act goal date of July 25th.

“We estimate that the market for this indication is approximately 6.5 million uUTIs caused by a quinolone non- susceptible organism annually in the U.S.,” said Corey Fishman, Chief Executive Officer in Iterum’s Q4 2020 business update. Following a hopefully successful outcome, Iterum is aiming to begin commercially launching in the fourth quarter.

Analysts at H.C. Wainwright recently upgraded ITRM. The firm has a Buy rating on the stock along with a price target of $2.50. Heading into the rest of April, it’s going to be interesting to see the market’s reaction to the upcoming presentations at the Annual Needham Healthcare Conference, which happens next Thursday.

The ultimate question when deciding if penny stocks are worth it: will sector stocks be a “buy” right now? To be clear, biotechnology stocks are known for their volatile nature. As I explained above, one bit of news can trigger huge breakouts and massive sell-offs depending on the news. With these companies, many have already announced upcoming catalysts to be aware of. If these are on your list of penny stocks right now, it will be important to keep these in mind.

The post Penny Stocks To Watch For April 2021 If You Like Biotech appeared first on Penny Stocks to Buy, Picks, News and Information | PennyStocks.com.