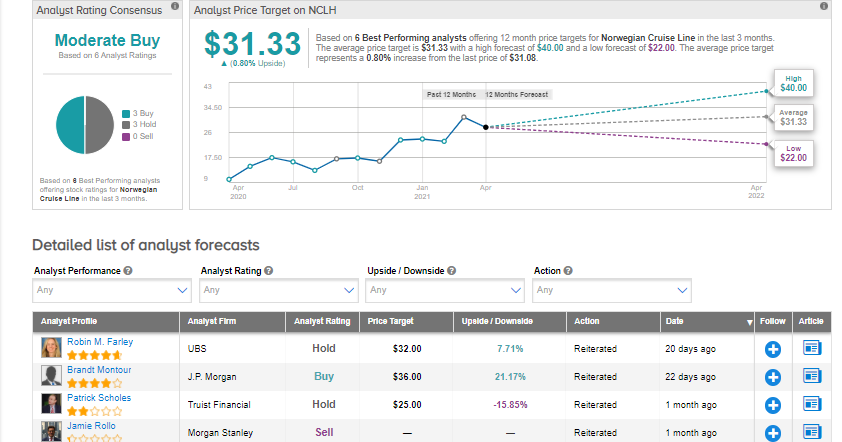 Norwegian Cruise Line Holdings plans a phased return to cruising. The cruise company unveiled a "two-pronged plan" with cruise resumption outside the United States from Jamaica, Dominican Republic, and Greece starting from July this year with the company’s ships including Norwegian Joy, Jade, and Gem.

Shares of the company were up by 3.2% in after-hours trading on April 6.

Separately, NCLH also submitted a proposal to the Center for Disease Control and Prevention (CDC) in the United States on April 5 with a plan for cruise resumption from US ports starting from July 4. It also requested the CDC to lift the Conditional Sail Order.

The company said that all initial voyages will operate only with fully vaccinated guests and crew and will include COVID-19 testing for all before embarkation as part of NCLH’s SailSAFE health and safety program. The Company also announced setting up of a SailSAFE Global Health and Wellness Council which would be chaired by former Commissioner of the US Food and Drug Administration (FDA), Dr. Scott Gottlieb.

NCLH’s President and CEO, Frank Del Rio said, “We are excited to unveil our initial plans for the resumption of cruise voyages embarking outside of the U.S. with sailings to the Caribbean and Europe. In addition, we continue to plan for a resumption of cruising from U.S. ports and await further discussion with the CDC regarding our proposal for a July 4 restart to participate in America’s national opening.” (See Norwegian Cruise Line Holdings stock analysis on TipRanks)

Last month, UBS analyst Robin Farley raised the price target from $21 to $32 and reiterated a Hold rating on the stock. Farley said in a note to investors that while the near-term outlook appeared worse due to continued delays in restarting cruising, the long-term outlook appeared better as vaccination becomes more widespread.

Farley also said that cruise companies like NCLH could benefit once the CDC releases technical guidelines for a test cruise.

The rest of the Street is cautiously optimistic about the stock with a Moderate Buy consensus rating. That’s based on 3 analysts suggesting a Buy and 3 analysts recommending a Hold. The average analyst price target of $31.33 implies around 0.8% upside potential to current levels.