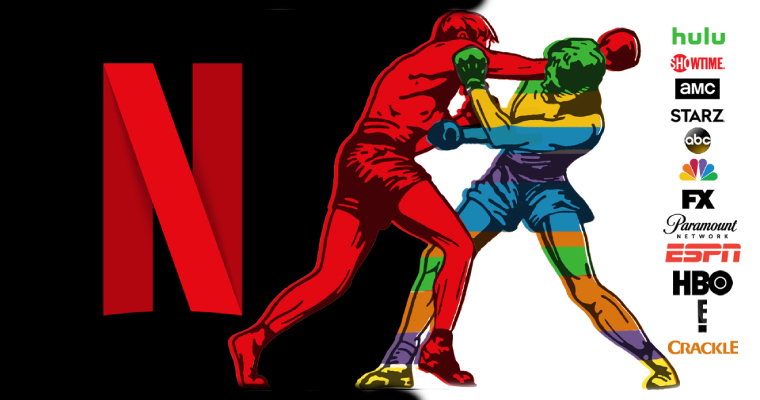 Recent earnings reports from streaming giant Netflix have been a mixed bag: the stock tumbled three quarters ago when the company reported earnings for its first full "post Corona" quarter and warned that "growth is slowing", before again plunging two quarters ago when the company reported a huge miss in both EPS and new subs, which at 2.2 million was tied for the worst quarter in the past five years, while also reporting a worse than expected outlook for the current quarter. This reversed last quarter when Netflix reported a blowout subscriber beat and projected it would soon be cash flow positive, sending its stock soaring to an all time high - if only briefly before again reversing... which brings us to today, when investors are on edge today to find out not whether the company would beat or miss expectations, but rather if Netflix, remains a pandemic-proof company and if the slowdown Reed Hastings warned about is for real and has pulled forward even more subscribers due to covid? After all, Netflix has been warning for months that growth would slow in early 2021 compared to the phenomenal signup rate at the start of the pandemic lockdown last year. And yes, brace for a huge base effect hit: in the first quarter of 2020, the service added 15.8 million new customers, the most in its history, a number which is unlikely to be repeated ever again.

To be sure, despite a series of mediocre earnings, the company has been riding a wave of optimism, its stock soaring in early 2020, putting it in the top 20 for S&P 500 companies, similar to the gains seen by other shutdown beneficiaries Amazon.com and Ebay. Still, after surging to a record high in early July, the stock has traded rangbeound, unable to break out to a new high, for the past 10 months. And while there’s no doubt that viewership has surged during the Covid-19 lockdowns in the U.S. and much of the world, there are complications: the virus has brought TV and film production to a halt, a situation that may only get more dire for Netflix as the months wear on. But the biggest question remains how many future subs has covid brought to the present?

Indicatively, consensus expects 6.29 million new subs this quarter, higher than the company's own guidance of 6 million, and a notable slowdown from the traditionally strong fourth quarter when NFLX added a whopping 8.51 million new subs. Revenue is expected to come in at $7.14BN, up from $6.64BN in Q4, and resulting in EPS of $2.98, up sharply from $1.19 last quarter. This is as streaming video remains on a hot streak since the pandemic struck. Something else to watch: Netflix bears will get added ammunition if Q2 guidance misses consensus for 7.39 million new users.

Previewing the quarterly result, Bloomberg analyst Doug Zehr writes that “after a blockbuster 2020, Netflix has been bracing for its toughest test yet in 1Q21, given comparisons to a record quarter a year ago when it posted nearly 16 million subscriber gains. The company should be able to deliver on 1Q guidance for 6 million additions given that most re-openings happened only in the latter half of the quarter.”

Media analyst Rich Greenfield listed several questions that he thinks investors should ask Netflix’s management, among them: why Netflix paid such a high price for the rights to future Sony movies and whether those films will come to Netflix in a shorter window than “Pay 1” films have historically.

Another thing to watch out for is how a slowdown in production last year is affecting the service. The filming of new shows and movies basically came to a standstill in early 2020, which curbed output in the following months.

So with all that in mind, was Q1 the quarter that would finally unleash another repricing higher for Netflix stock? Alas, not this time because despite a solid beat in revenue and EPS, Netflix reported absolutely dismal subscriber numbers, and an even more dismal outlook.

First, the good if largely meaningless news, a beat on the top and bottom line:

And then the absolutely dismal news:

Why the dismal numbers? Simple: the long-overdue post-covid hangover has arrived: "we believe paid membership growth slowed due to the big Covid-19 pull forward in 2020 and a lighter content slate in the first half of this year, due to Covid-19 production delays."

And while that is certainly true, a bigger question is how much of the sharp growth slowdown is due to the recently instituted price increase.

And while NFLX' Q1 operating margin was at an all time high, this was largely because Netflix simply spent less on programming.

Here is the full ugly breakdown:

And here is the miss in Q1 actuals vs forecast:

What is bizarre is that in the first quarter, NFLX released some of its biggest hits ever, including season three of the “Karate Kid” spinoff “Cobra Kai”; the much-talked about Shonda Rhimes drama “Bridgerton,” which came out Christmas Day; and “Lupin,” the French thriller which 76 million households watched. And yet... it wasn't enough.

Despite the big miss in Q1 subs, the company said that the fundamentals of its business “remain healthy” and that Q1 “churn” was below what it was a year ago, “demonstrating that as we improve the service, we can charge a bit more."

It gets even worse looking ahead, as NFLX now predicts just 1MM total subs added in the current quarter:

Here is the company's justification for this dismal projection:

With similar pull forward and delayed slate dynamics plus our typical seasonality expected to impact Q2’21, we project paid net additions of 1m (vs. 10m in the prior year quarter) with our UCAN and LATAM regions expected to be roughly flattish in memberships (+/- a couple hundred thousand paid net adds).

Of course, it had to give some possible upside, and sure enough the company hopes that the second half is where it all turns around... which means that least NFLX is honest about expecting new lockdowns this summer.

We anticipate paid membership growth will re-accelerate in the second half of 2021 as we ramp into a very strong back half slate with the return of big hits like Sex Education, The Witcher, La Casa de Papel (aka Money Heist), and You, as well as an exciting array of original films including the finale to The Kissing Booth trilogy and large scale, star-driven features like Red Notice (starring Gal Gadot, Dwayne Johnson and Ryan Reynolds) and Don’t Look Up (with an all-star cast including Leonardo DiCaprio, Jennifer Lawrence, Cate Blanchett, Timothée Chalamet, and Meryl Streep). We’ll also have our most comprehensive offering to date of local language titles including Too Hot to Handle for Brazil and Mexico

Discussing the lousy subscriber numbers - which Reed Hastings could have easily sandbagged 3 months ago but didn't - NFLX said, that the extraordinary events of Covid-19 led to unprecedented membership growth in 2020, as it pulled forward growth from 2021, and delayed production across every region.

In turn, we ended 2020 with a bigger membership and revenue base than we would otherwise have had, contributing to record Q1’21 revenues. And since we were still ramping production levels late last year, we had lower content spend in Q1’21 - content amortization only grew 9.5% year over year in Q1’21 vs. 17% in FY20. The result was a 10 percentage point year over year jump in our operating margin to 27% in Q1, which is an all-time high."

As a result of these dynamics, which NFLX had warned about previously, the company had a "lighter content slate in the first half of 2021, and hence, we believe slower membership growth."

This translated into paid net additions of only 4 million, which were below the company's own 6 million guidance (and the 16m net additions in the year ago quarter) "primarily due to acquisition, as retention in Q1 was in line with our expectations." Hoping to ease investor nerves, NFLX said that it "doesn't believe competitive intensity materially changed in the quarter or was a material factor in the variance as the over-forecast was across all of our regions. We also saw similar percentage year-over-year declines in paid net adds in all regions" but judging by the plunge in the stock price, investors aren't really buying it."

In short, Netflix is blaming the big miss (and drop) in first-quarter subscribers on a slate of movies and TV shows that’s been slow to ramp up after the Covid-19 shutdowns of last year.  The company said the shortfall -- 4 million subs versus their estimate of 6 million -- came in all regions.

There was some good news in NFLX cash flow, which reversed last quarter's plunge, and rose $692 million, up from $162MM a year ago. NFLX notes that "for full year 2021 free cash flow to be approximately break even" and adds that as discussed last quarter, NFLX believes it is "very close to being sustainably FCF positive and that we no longer have a need to raise external financing to fund our day-to-day operations." We'll see if at least that promise pans out.

But knowing well that the market would puke on its dismal earnings, NFLX resorted to the nuclear option, and announced that it would launch a $5BN stock buyback:

Our board has approved a program to repurchase up to $5 billion of our common stock beginning in 2021 with no fixed expiration date. We expect our buyback program will begin this quarter.

Needless to say, stock buybacks are gimmicks that (formerly growth) companies implement when they run out of ideas how to grow rapidly without pandering to shareholders...

... which then begs the question: has NFLX plateaued?

As Bloomberg notes, that’s a question investors should be asking after this release. In the U.S. and Canada, subscriber growth has been below 1 million for the past three quarters. Those 74 million domestic customers may be just about all the company can hope for. In Latin America too, growth has been anemic at just 360,000 new paid memberships last quarter, while ARPUs have tumbled. Streaming competition has been heating up recently in Europe, where customers rose by 1.8 million.

In other words, price increases are the only thing delivering the revenue growth!

The stock, which has a 1.4% Nasdaq weighting is crashing after hours, down as much as 10% to $480 and last trading just around $492. As Bloomberg notes, if the share drop holds through Wednesday’s close, it would be the worst one-day decline after earnings since the second quarter of 2019