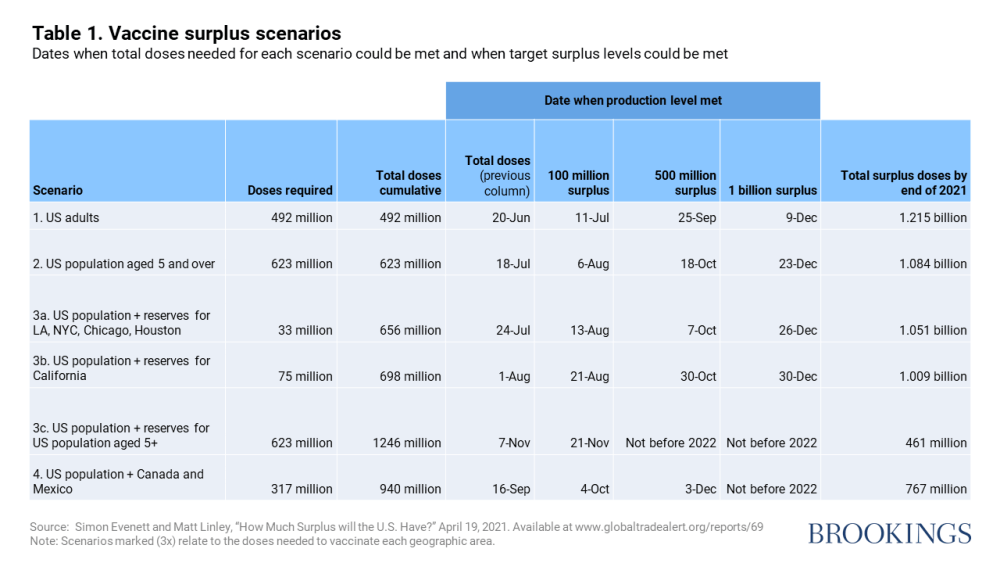 The Biden administration is busy burnishing America’s global credentials. The U.S. Treasury wants an international approach to corporate tax. Meanwhile, climate change talks with other governments are on the front burner. But the administration’s vaccine diplomacy has been slower off the mark. Circumstances will force that to change in the second half of 2021.

For many Americans, getting a jab in the first place is still the priority. However, despite the impressive scale-up of COVID-19 vaccine production, U.S. plants will soon have manufactured more doses than are needed to inoculate the adult population. Coming at a time of a global vaccine shortage, the White House will need to make important decisions that will determine whether it is seen as making a decisive break with its inward-looking predecessor.

Arguably, the White House is edging toward a policy of sharing surplus vaccines with foreign governments. In March, the Biden administration decided to “loan” 4 million doses of the AstraZeneca vaccine to Canada and Mexico. White House Press Secretary Jen Psaki stated, “Our first priority remains vaccinating the U.S. population. The reality is that—but the reality is the border knows no—the pandemic knows no borders. And ensuring our neighbors can contain the virus is a mission-critical step—is mission critical to ending the pandemic.”

Last week, the administration went further and announced that up to 60 million doses of the AstraZeneca vaccine would be available to other countries. India, a potential ally in geopolitical rivalry with China, is mentioned as a potential beneficiary, not least given the surge in COVID-19 infections there. But just how much surplus vaccine will the U.S. have and when?

Much depends on decisions the U.S. takes concerning its own vaccine rollout, the reserves it decides to build, and the policy toward its neighbors. Recently, Matt Linley and I worked through a series of scenarios based on the following recent developments. First, some vaccines have reported high levels of efficacy among children, raising the question as to whether inoculation will be extended to Americans aged 5 years or older. Second, fears have been expressed about future variants and the need to build up a U.S. reserve of vaccines. Third, vaccination rates in Canada and Mexico lag behind those in the United States.

Each objective requires a certain amount of vaccine doses to be produced (see column 3). Using detailed data on production schedules per U.S. vaccine production facility, we report the date when the required production level is met (see column 4) and the dates when any surplus generated thereafter reaches 100 million, 500 million, and 1 billion doses.

Production necessary to vaccinate the U.S. adult population should be completed by June 20, 2021. Following that, a surplus of 500 million doses will have accumulated by September 25. These two dates move back to July 18 and October 18, respectively, if American children are inoculated as well. Even with the latter approach, by the end of the year, the U.S. vaccine surplus is estimated to be over 1 billion doses.

Should the White House decide to inoculate the populations of Canada and Mexico as well as every American aged 5 and over, then a surplus becomes available by September 16. Clearly, the larger the U.S. vaccine reserve created the later surpluses become available (see scenarios 3a, 3b, and 3c below). The date when the U.S. can contribute to vaccine dissemination outside of North America is materially affected by the scenario chosen.

U.S. public health will be safeguarded by distributing surplus vaccines. Variants are springing up where large fractions of foreign populations remain unvaccinated. Recent months have shown that even with international trade restrictions, these variants cross borders and threaten lives. Done right, the United States could be in the vanguard of global vaccine distribution from the third quarter of this year.

The optics of the United States sitting on 0.5 to 1 billion surplus vaccine doses later this year will color the perceptions of the Biden administration. Given how sensitive the issue of equitable vaccine distribution has become, it is almost certain that foreign and international economic policy goals of the Biden Administration will be compromised if this matter is handled poorly.