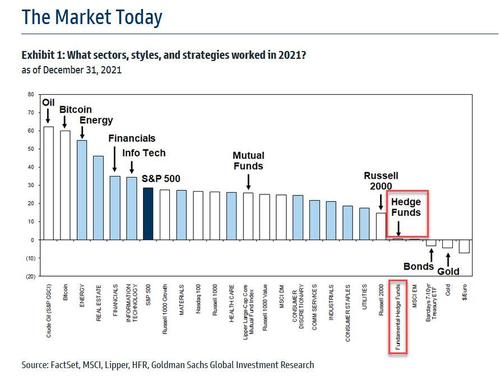 Here Are The Best And Worst Performing Hedge Funds Of 2021

It was another painful year for most hedge funds, with many suffering the pain of their short books shooting up during periods of heightened retail trading such as the start of 2021, followed by a just as painful rotation in and out of the growth to value (and vice versa) rotation. As a result hedge funds as an industry were one of the worst performing asset classes of 2021, trailed only by emerging markets, Treasurys, gold and the euro.

And incidentally, here are the best and worst performing S&P stocks of 2021.

But while most hedge funds underperformed their benchmark for yet another year, some stood out. Here, courtesy of the HSBC Hedge Weekly is a list of the best and worst performing hedge funds of 2021 (and yes, any year when the Tulip Trend Fund is the top 10 you just know markets were micromanaged by central banks).

Not surprisingly, the best performing hedge fund tracked by HSBC, Senvest, is also the one that quietly orchestrated the Gamestop short squeeze mania (the fund was extremely long the stock around the time it became a Reddit sensation then quietly sold out its entire stake in January just as the stock was surging lifted by retail daytraders).

That said, and demonstrating just how challenging 2021 was, not even half of the Top 20 funds managed to outperform the S&P500. And while the typical response is that they are not supposed to outperform the S&P500, when they fail to do so every year for a decade, well... no surprise why launching a new fund has become virtually impossible. Then again, 2022 is a year when there will be little if any Fed support for the market (at least until the whole tightening frenzy fades away) so all these underperforming hedge funds will surely be able to prove themselves... right?

In any case, digging among these names, what stands out is that event-driven and stock-picking hedge funds were the best-performing strategies last year, according to preliminary figures from the Bloomberg hedge fund indexes. Funds such as the iconic Renaissance Technologies and Senvest Management (noted above) posted double-digit gains for their investors.

In addition to Senvest, another prominent hedge funds that made the list was Jim Simons' Renaissance Technologies, which made a comeback after a lousy 2020. The firm posted double-digit gains across all three of its public hedge funds. The equity-focused quant funds had their worst year in 2020 when the algorithms struggled with the pandemic-driven market tumult.

In the world of multi-strat, or "pod" funds, Citadel bested its peers, posting a 26% return for 2021. The $43.1 billion firm’s Wellington fund, which runs a market neutral strategy, beat D.E. Shaw & Co. and Millennium Management even as their hedge funds had double-digit gains.

As a group, multistrats rose 8.3% last year through November, and they saw more inflows than any other strategy, attracting $28 billion from investors for the period, according to eVestment. Investors flocked to these funds to diversify their portfolios and to gain exposure to investments that aren’t correlated to the stock market.

ExodusPoint Capital Management and Sculptor, formerly Och Ziff, came in at the bottom of the group with gains of about 5% last year.

“There has been a range of performance from stellar to well below average among these capital raising powerhouses,” eVestment researchers wrote in a report. “How does this bode for the group heading into 2022? Frankly I’m on the fence between ‘we’ll have to wait and see,’ and ‘I’m not concerned.’”

And while 2021 had its share of emotional rollercoasters in the world of 2 and 20, with Russell Clark Investment Management - the fund we had once dubbed the world's most bearish - shutting down in November after losing the fight with central banks, one fund that stood out was Crispin Odey’s funds which made a roaring comeback after years of underperformance.

According to Bloomberg, in 2021 the London-based money manager enjoyed both his best-ever monthly return and suffered his worst monthly loss, before ending the year with a gain of almost 54%. Odey’s fund was up as much as 108% through September before giving up half those gains in the last quarter of 2021. February marked the fund’s best month, largely on the back of a massive government bond short, while October was its worst.

Alas, gone are the days when Odey managed billions: his strategy has shrunk over the years and ran about $383 million at the end of November. That's because a dollar invested in the fund at the start of 2015 is still worth only about 51 cents now.

The annual return, Odey's best since 2007, comes as a welcome respite for the hedge fund manager, who stepped down from running his eponymous firm to focus on trading in 2020 and has faced public scrutiny for years for his stunning losses and support for Brexit.

As Bloomberg notes, at least two bets helped power the fund’s surge. The first targeted long-dated government bonds amid expectations that a post-pandemic economic recovery will fan inflation. The fund’s short exposure to bonds totaled 902% of its net asset value at the end of November. The second was a stake in Oxford Nanopore, which surged in value after the DNA-sequencing company listed in London in September.

As noted here in the past, Odey has for years predicted a market collapse and been one of the most vocal critics of QE.

Top Copper Stocks in 2022: Is This the Year Copper Breaks Out? 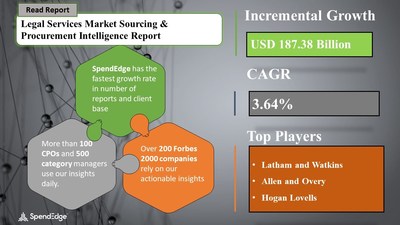 NEW YORK, Aug. 18, 2022 /PRNewswire/ -- The "Legal Services Market" report has been added to SpendEdge's library which is trusted by more than 100 CPOs and 500 category managers who use our insights daily.

The Legal Services market is poised to grow by USD 187.38 Billion, progressing at a CAGR of almost 3.64% during the forecast period.

Key Highlights Offered in the Report:

Fetch actionable market insights on the post-COVID-19 impact on each product and service segment.

Some of the Top Legal Services suppliers listed in this report:

Fetch actionable market insights on the post-COVID-19 impact on each product and service segment:

To access the definite purchasing guide on the Legal Services that answers all your key questions on price trends and analysis:

Only 14% of Consumers with Federal Student Loans on Pause Can Afford Payments, ScoreSense Survey Finds 62% of survey respondents say they are delaying major life purchases 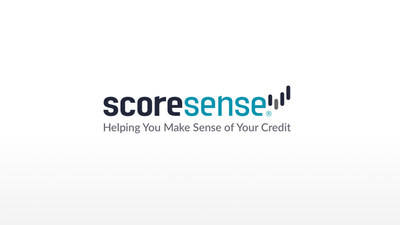 Only 14% of Consumers with Federal Student Loans on Pause Can Afford Payments, ScoreSense Survey Finds 62% of survey respondents say they are delaying major life purchases

DALLAS , Aug. 18, 2022 /PRNewswire/ -- A survey of consumers with federal student loans on pause, which went into effect during the COVID-19 pandemic, reveals that only 14% of respondents say they can afford the payments with no issues when the forbearance period ends, according to a consumer survey by ScoreSense®, a credit score monitoring product. The survey also revealed that 42% of respondents aren't sure how they will add loan payments back into their budget. The most recent extension to the payment pause, which began in March 2020, continues to August 31, 2022, with payments currently scheduled to restart in September.

18% of survey respondents say they will need to cut budgets or rely on family to help to resume loan payments.

The survey, focused on the resumption of federal student loan payments and implications, included these highlights:

•       To resume payments, 18% of survey respondents say they will need to cut their budgets or rely on family to help to add these loan payments back into their budgets. About one of four respondents between the ages of 18-34 will need help from family members to help with student loans.

"Unfortunately, we're seeing the perfect storm of economic stress on households where higher prices, interest rates, property assessments, and more is making it very difficult for many people to live within their means. For many student loan holders, making payments in 2020 was much easier than it will be when they resume," said Carlos Medina, senior vice president at One Technologies, LLC., which offers ScoreSense.

ScoreSense serves as a one-stop digital resource where consumers can access credit scores and reports from all three main credit bureaus—TransUnion®, Equifax®, and Experian®—and understand what is most affecting their credit.

One Technologies, LLC, harnesses the power of technology, analytics, and its people to create solutions that empower consumers to make more informed decisions about their financial lives. The firm's consumer credit products include ScoreSense®, which enables members to seamlessly access, interact with, and understand their credit profiles from all three main bureaus using a single application. The ScoreSense platform is continually updated to give members deeper insights, personalized tools and one-on-one customer care support that can help them make the most sense of their credit. One Technologies is headquartered in Dallas and was established in October 2000. For more information, please visit onetechnologies.net.

Inflation could slow rather than stop industry bounce-back

AVON, Conn., Aug. 18, 2022 /PRNewswire/ -- The voluntary benefits market will likely continue its trend of healthy sales growth for the next several years, according to a new report from Eastbridge Consulting Group. However, lingering concerns about the impact of inflation could hold growth well below 2021's strong double-digit results.

Eastbridge's Forecasting Voluntary Sales Spotlight™ Report analyzes the current sales environment and projects future sales potential in the voluntary market. It offers several different scenarios dependent on the industry's rate of recovery from the pandemic, inflation and other factors based on Eastbridge' longstanding expertise in the industry. The report is designed to help carriers develop their own predictions for future opportunities, update their business plans and determine what investments to make.

Despite the uncertain economy, the report shows continued opportunity for carriers and producers in the voluntary market.

Information about purchasing the Forecasting Voluntary Sales Spotlight™ Report is available on Eastbridge's website. Those interested can email info@eastbridge.com or call (860) 676-9633.

How Long Will This Recession Last?

If This is a Recession, It’s a Pretty Weird One

Housing permits, starts, and units under construction telegraph a deeper economic decline ahead

A doctor’s journey through constraints and creativity in the ER

A fast, accurate, equipment-free diagnostic test for SARS-CoV-2 and its variants