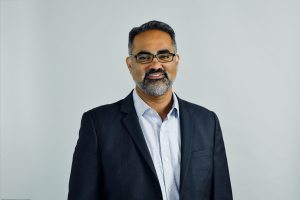 Rahul Dhanda, CEO of Sherlock Biosciences, talks to GEN about the current landscape of COVID diagnostics development. He also shares how he, and his company, are committed to working to improve global health by overcoming systematic impediments and increasing representation and equity.

At-home COVID-19 tests hit local pharmacies in the United States last week, more than a year after the pandemic settled in. When we last spoke to Rahul Dhanda, CEO of Sherlock Biosciences, he explained how Sherlock was working toward a CRISPR-based COVID-19 diagnostic. We caught up with Dhanda, about a year later, to get an update on the progress of those tests, learn about new directions at Sherlock, and to learn about Dhanda’s view on what it means to run a company committed to global health. (The interview has been lightly edited for length and clarity.)

Subsequent to our conversation, Sherlock announced a licensing agreement that will enable the lifestyle sensor company LogicInk to utilize their CRISPR technology to develop an instrument-free biosensor for COVID-19 testing. The collaboration hopes to develop a non-invasive, saliva-based, self-administered test with the accuracy of a standard PCR test.

GEN: Let’s talk about the tests. The last time we spoke, you had started a collaboration with IDT to manufacture your CRISPR-based tests. How is that going?

Dhanda: We have a couple of different things going on at the moment, some with the CRISPR technology and others with the synthetic biology (synthetic gene network) technology.

What we launched with IDT about a year ago is a CRISPR-based, lab-based test that is being used in CLIA high complexity labs—like reference labs or central testing within a hospital. Today, there are now about 200 molecular solutions that fit in this category.

What is really exciting is that this test is the first ever CRISPR authorization for any product—therapeutic or diagnostic. It opened up the world, and the market, to accept CRISPR as having arrived for use in healthcare. The initial EUA allowed us to validate this robust technology as something that is rapidly deployed and suitable for use in a number of different formats and settings. And that product then became the licensed asset that has served as the backbone of several deals which are now becoming different embodiments of that product.

Within Sherlock, we’ve spent a lot of time working to increase the simplicity of the assay. We’ve made progress in a couple of areas, one area being the discovery of new CRISPR enzymes that simplify the method while expanding its multiplexing ability. What was once a system that required pipetting and transfer of materials is now fully integrated and can be done as a multiplex in a single reaction.

GEN: What can we expect in the near future from Sherlock?

Dhanda: Our goal is to obviate the need for an instrument, which is what every at-home molecular diagnostic test has today. There has been tremendous progress in this space by companies like Lucira Health, Visby Medical, and Cue Health, as organizations that are driving molecular tests towards at home. But they are running amplification. There are tiny devices, which are great, but have a different kind of cost profile. Our goal is to have the cost and use case of the antigen test, but the performance of the molecular tests. We are exploring that with both of our programs, but we’re making much more progress on the synthetic biology side, with the INSPECTR technology, which is more suited to that approach.

GEN: How are you going about making a cheap, accurate, at-home test?

Dhanda: A year ago, the INSPECTR platform was fairly nascent. But the progress we’ve made gives us great confidence that it is a leading solution for the profile of simplicity, low cost, and high accuracy. What began as a COVID program is now being re-evaluated for something that is more expansive than COVID. There’s a lot of momentum right now to think about infectious disease diagnostics more expansively. The market is moving towards a focus on multiplex tests that are multiple targets for respiratory disease rather than singular COVID-19 tests.

GEN: How will you incorporate testing for different variants?

Dhanda: Detecting a variant in a test becomes especially important if there are different interventional approaches or patient presentations or patient outcomes with a variant. The good thing for Sherlock is that our ability to develop tests is rapid and simple. So, we can respond quickly. And thus far there hasn’t been a clinical data set that says that treatment will vary in a symptomatic COVID patient because they have a particular variant. But as we define different therapeutics and different vaccine boosters, it might be more valuable.

GEN: How many different targets can you have in your Synthetic Biology at-home test?

Dhanda: The test itself isn’t limited in its multiplexing ability, because for every target we detect, we generate a different kind of signal that can be distinguished. So that’s not the limit. The limit is what is interpretable by an individual using the system.

We don’t want more than four or five targets, to balance the interpretation. We can make a test that is five strains of SARS-CoV-2, or three strains of SARS-CoV-2 and two flu strains. All of this is going into our calculus as we think about how we will mature this program to make sure it’s most useful for public health.

This is a remarkable moment for us—going from the past pre-vaccine world to the pre-widespread vaccination world that we are in, to the future post-vaccine world, along with this new bolus of at-home test availability. This evolution has helped us define more clearly how to play in the market.

GEN: You recently wrote a letter to your team on the company’s role in the Black Lives Matter movement. In it, you state that, as long as you are at Sherlock, “the company will always act in ways that support the ideas of BLM and racial justice and equality.” I’m sure that many people share that sentiment, but I don’t see too many letters like that penned by CEOs. What prompted you to write the letter?

Dhanda: I’d spoken to a number of executives in the biotech space and one in particular told me that I have a tremendous amount of power in my role as CEO. He added that, when it comes to social justice issues, CEOs think more about the risks and the impact. He asked me to think about the following question… do you want to look back and wonder if you could have done more? That question crystallized for me that I thought I was doing a lot, but I wasn’t doing everything I could.

The letter opens with a moment that was a revelation for me when some of the team asked if they could participate in a George Floyd demonstration. The question hurt because I would have liked the question to have been, will you join us? Not, can we do it?

I thought that I’d made clear to the organization that we are an equitable and accountable organization. When Sherlock was founded, I made it clear that we are going to do better when it comes to gender and minorities in terms of our representation. And we do better for women; we are more than 50% women. And we do okay for some for the BIPOC population. But we don’t do as well as I’d like.

What compelled me to write the letter was that I wanted everyone to understand that Sherlock isn’t a sideline company when it comes to doing right. Our mission isn’t global health up and to the limit of medicine. It’s global health. And global health is about equity, access, and representation. If we don’t participate in representation and equity outside of healthcare, then we’re not committed to global health.

I recognize that progress has historically been the enemy of change. Many people cry victory when there’s a policy change that doesn’t actually solve the problem. But that prevents us from making change. I don’t want my organization to think that way.

I don’t know how we can be committed to global health as an industry and not be committed to overcoming the systematic impediments to achieving it. I know that we will not be the organization that makes all that change possible, but we will be a catalyst to focus on change.

The post COVID, CRISPR, and a Commitment to Global Health: An Interview with Sherlock Bio’s Rahul Dhanda appeared first on GEN - Genetic Engineering and Biotechnology News.