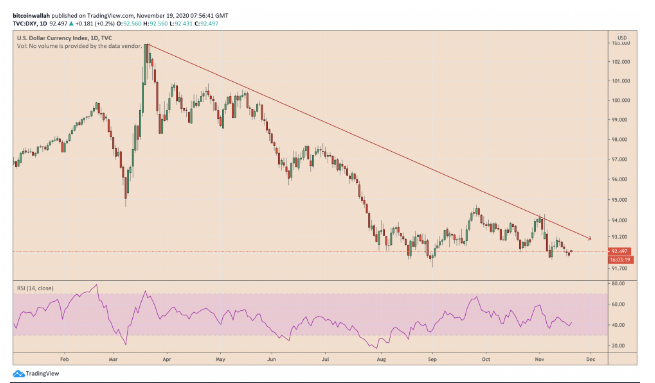 Citibank predicts 20% dollar crash but also believes that the Bitcoin bull market will continue in 2021 so let’s read more about the analysis in our cryptocurrency news today.

At the start of the year, Nasdaq-listed MicroStrategy converted $425 billion worth of cash reserves to BTC and explained that they were willing to invest in an asset that will remain volatile and unregulated, according to CEO Michael J. Saylor. He said that BTC has a better “long-term appreciation potential than holding cash.”

#Bitcoin is a monetary network that gets stronger as more individuals & corporations adopt it to protect their treasury reserves. The fire in cyberspace is spreading… https://t.co/FYECxu56EK

Many analysts agree that the investment by Microstrategy in Bitcoin’s market prompted other investors, companies, and asset managers to look at the cryptocurrency from a different perspective which is that the store of value that can protect the holders of inflation, is most likely BTC. Now, many of them admitted that they have purchased Bitcoin already. The result can be seen across the spot and derivatives market since the BTC/USD exchange rate is now going up by almost 150% in 2020, topping the $18,500 price range. Analysts expect that the pair could rally even higher at $20,000 which was the record level established in December 2017. In the meantime, the bullish bias got more fuel from the bearish dollar prediction.

Citi analyst Calin Tse explained the prospects of a weaker US Dollar in his research and said that it could fall by about 20% in 2021 because of the risks induced by the COVID-19 vaccine arrival as well as the stimulus program by the Federal Reserve. Tse said that Citibank predicts a 20% crash for the dollar and said:

“Vaccine distribution we believe will check off all of our bear market signposts, allowing the dollar to follow a similar path to that it experienced from the early to mid-2000s. Can the dollar decline 20 percent next year alone? We think yes.”

The investors are choosing the US Dollar in times when there’s global economic uncertainty as in 2020 back in March, the dollar was one of the biggest beneficiaries once the lockdowns started because of the COVID-19 cases which eventually led to a market crash. Bitcoin which is an asset that switches roles between being risky and not being risky, crashed by almost 60 percent in just 48hours of trading.

The prospects of economic recovery are now improving which adds more pressure on the US dollar. It already crashed by 4 percent against other foreign currencies this year. weaker dollars usually bring major companies to rethink their capital allocation strategy, according to ETH Strategist at ETH Think Tank Stan Weiskoph, outlining the strength of the corporations’ balance sheets and how they are benefiting by investing in BTC.