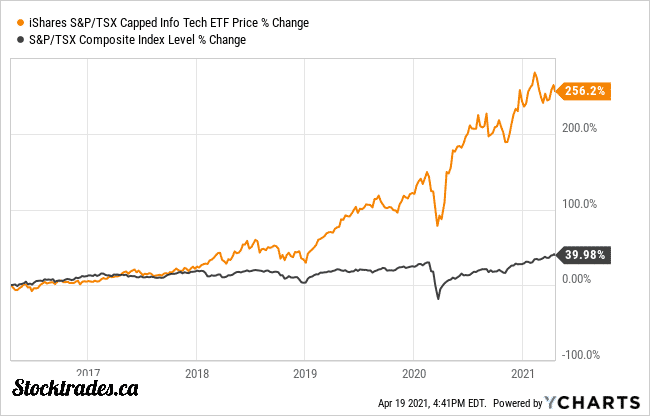 It's no surprise that Canadians are looking for tech exposure. After all, the COVID-19 pandemic has placed a spotlight on "work from home" solutions to keep people safe.

And although glass half empty investors will have the attitude that life will eventually return to normal and Canadian tech stocks will fade, glass half full investors realize that a transformational shift has already occurred, and tech isn't going anywhere.

In fact, all the pandemic has done is guarantee more rapid adoption of technology here in Canada.

However, picking individual tech stocks is extremely hard. As such, many Canadians are looking for Canadian tech ETFs to not only get exposure here in Canada, but south of the border as well.

In this article, I'm going to go over some Canadian ETFs that can get you single click exposure to all of the popular technology options in North America.

In terms of company exposure, you are truly getting the best of the best with this ETF.

Its top 4 holdings are some of the biggest technology companies in the country in Shopify (TSE:SHOP), Constellation Software (TSE:CSU), CGI Inc (TSE:GIB.A) and Open Text Corp (TSE:OTEX).

The technology ETF has posted outstanding returns in the last 1, 3, 5 and even 10 year periods, and if you have owned this ETF over the last decade you have simply crushed the broader TSX Index.

One of the key reasons for this was the meteoric rise of Shopify, which has not only been one of the best technology stocks in the country right now in terms of growth, but in all of North America.

The reason I'm focusing in on these two companies is because a purchase of XIT is essentially a massive bet on both Shopify and Constellation. This is because the two stocks make up over 50% of the funds total holdings.

The tech ETF is diversifying and continually adding new holdings, like recent addition Hut 8 Mining Corp (TSE:HUT) and Quarterhill (QTRH), but the exposure is very minimal.

This is by far the best Canadian tech ETF you can buy today if you want pure-play exposure to Canada's top technology companies. Just understand that it comes with a severe degree of concentration risk because of the heavy allocation to two stocks.

Canadian tech investors rejoice! We finally have a low fee option from TD that exposes us to some of the best technology options here in North America, and that is the TD Global Technology Leaders Index ETF (TSE:TEC).

In terms of Canadian exposure, this ETF contains next to none. In fact, the largest Canadian related option inside of this portfolio is Shopify at 0.72%. In terms of total holdings, this is the 25th ranked company inside of TEC.

87% of the fund is targeted towards North American technology companies, including some big allocations towards US tech giants Apple (12.13%) and Microsoft (10.38%). Overall, it has 249 total holdings.

In terms of the top 10, Apple and Microsoft are the only 2 with double digit weightings, but this tech ETF contains some of the most prominent companies in the world including Amazon, Facebook, Alphabet, Via, Tesla, NVIDIA and Paypal.

The ETF is a global tech option, with 6.40% of holdings in the Greater Asia region and 6.16% in the Greater Europe region. But make no mistake about it, this is essentially a US technology pureplay.

The ETF has over $1.647 billion in assets under management and daily volume of 63,961 shares. So, liquidity shouldn't be an issue at all for the average retail investor.

Fees are lower than XIT, coming in at 0.35% and the fees are actually somewhat eliminated with the small dividend (0.27% at the time of writing) that the ETF does pay.

Lets not kid ourselves, we aren't buying these Canadian tech ETFs for the distribution.

So, it's really nice that it can at least offset the fees to the point where this fund is almost free.

In terms of performance, there isn't much to go off of because the fund is new. Its returns are also going to be skewed because of COVID-19 and the tech surge. I'll want to see half a decades returns before I judge the true effectiveness of the ETF.

But for now, it looks very promising.

TEC 5 year performance vs the NASDAQ since inception

This is a relatively unknown Canadian tech ETF. Primarily because the hedged version (which is ZQQ by the way if you'd like to look at it) takes all the attention.

But I like unhedged ETFs, as I believe the back end fees and work required to hedge have historically made these currency hedged ETFs underperform. This is why I've included the unhedged version BMO NASDAQ 100 Equity Index ETF (TSE:ZNQ).

The hedged version has outperformed the non-hedged by around 5% over the last couple years. However, the environment has changed somewhat with the high Canadian dollar.

The ETF's top holdings mimic that of, you guessed it, the NASDAQ 100. In fact, the ETF's goal is to simply replicate the performance of the NASDAQ 100 Index.

It has struggled to do so over the last year and we'll get to that on the performance chart below, but this is still an ETF that has posted outstanding returns since its inception in early 2019, turning $10,000 into $18,580 during that time period.

The ETFs largest and only double digit holding is Apple at 12.17%, and after that we see much the same as TEC in the fact it holds Microsoft, Amazon, Tesla, Alphabet, Facebook, NVIDIA and Paypal.

There are no Canadian companies in this ETF. Shopify would likely be included, but the company trades on the New York Stock Exchange.

If you're looking for exposure to the NASDAQ 100 with some relatively low fees, this is an ETF you'll want to take a look at.

With fees of 0.35% and a dividend of 0.45%, your distributions will more than cover the fees and you'll be able to relax and soak up the capital appreciation that the NASDAQ 100 will provide.

However keep in mind, this unhedged variant is much smaller than its hedged counterpart, with assets under management of only $112 million and average daily volume of 7760, compared to $1.436 billion and 185,045 in average volume for the hedged version.

However, it provides more than enough liquidity for the average retail investor.

ZNQ performance since inception vs ZQQ and Nasdaq 100

Overall, these Canadian tech ETFs provide solid exposure to a variety of markets

If you're looking for Canadian exclusive tech exposure, than XIT is going to be the best Canadian tech ETF around.

However, globally TEC provides some very unique exposure and also does so with some pretty low management fees.

And finally, if you're looking for exclusive exposure for tech south of the border and to the NASDAQ 100, the unhedged version of BMO's product should serve you fine. If you feel you still want to be hedged to the Canadian dollar however, look at ZQQ.

On a side note, if you're looking for tech exposure in international markets, have a look at our top emerging market ETFs in Canada.

These Canadian tech ETFs all sport higher, yet completely reasonable fees due to the fact they are "niche" ETFs and not broad index funds. They require a little more active management, and as such you'll pay for this.

But in all situations, the fees are essentially non factors because of the returns.