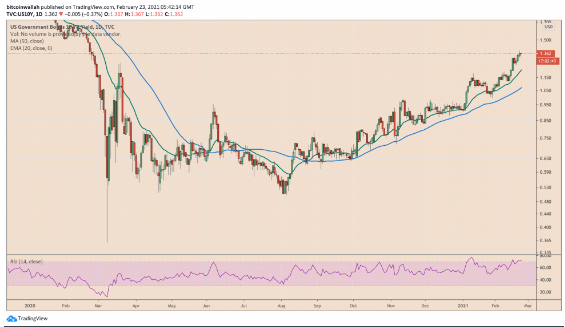 BTC drops alongside tech stocks as the cryptocurrency crashed on Monday and continued crashing into early Tuesday and got down from its ATH at $57,000. However, Tech stocks are dropping as well while bond yields rise so let’s read more in today’s Bitcoin news.

The number one cryptocurrency lost more than $8000 to trade below $50,000. The coin was changing hands for $46,700 as its week-to-date low and the closest market rivals ETH and Binance fell 20 and 17 percent in the same time. All of the assets were trading at record highs before posting broad declines which eventually raised concerns among traders that the crypto market is crashing similarly as it did in 2018.

The assets powered the crypto market’s rebound from the COVID pandemic-led selloff back in March and they also became preferred for the small investors that piled into options trading while the lockdown lasted. The retail boom received even more tailwinds when Wall Street started getting interested in BTC as their bet against inflation. Over the past few months, Microstrategy upped their game and now has a total of 71,000 BTC. Tesla also purchases $1.5 billion worth of BTC in February which propelled the crypto’s market cap above $1 trillion for the first time ever.

PayPal on the other hand launched a new service onto its traditional payment platform and Mastercard announced an entry into the emerging space. Bank of New York Mellon also got interested in BTC custodian services. The BTC adoption on Wall Street surged because corporate and investment companies speculated on its role as a safe-haven asset during the global economic uncertainties.

Right now, BTC drops alongside tech stocks but the selloff didn’t have a clear catalyst yet. Investors are becoming more confident for a continued US Economy recovery as the Treasury went down and pushed up yields which move opposite to their rates. This increased the government bonds’ attractiveness which ended up reducing Bitcoin’s appeal as a risky asset. The yield on the US 10-year Treasury note increased to 1.367 percent which is the best level recorded since last year. That led the tech stocks lower which similarly to BTC, were trading near record highs.

Analysts in the crypto space saw the decline as a short-term shock as Ben Lilly noted, the Federal Reserve will have to buy up more government bonds to keep up the economy and all yields capped. The FED Chair Jerome Powell noted:

“If the FED does scale up their purchase of Treasuries, then this can be bullish for bitcoin.”