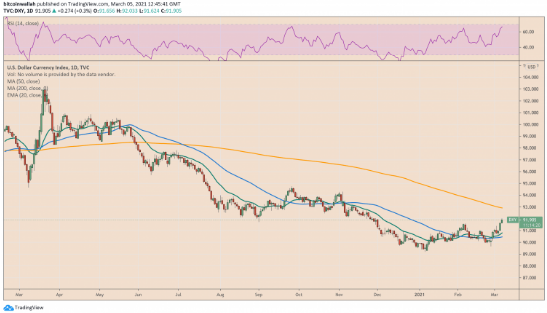 BTC Bearish correction stops while the focus is set on dollar and yields with the BTC prices extending the losses back on Friday as the dollar gained more alongside the long-term yields as we are reading more in our latest Bitcoin news.

The downside pressure on cryptocurrency remains amid expectations of the modest job growth in the US with the technical support offered by the 20-period moving average on the four-hour chart that maintains BTC’s medium-term bullish outlook. BTC dropped back on Friday suggesting that the number one cryptocurrency will decline further into the week and allowed for an equally depressive weekend session in the wake of the rising US dollar and the spike in the US Treasury yields.

The spot rate for the pair dropped 2.43 percent into the daily session while the pair was trading in a positive area on a week-to-date basis or has increased by more than 4.5% ahead of the weekend session. The price action was quite choppy and gave no clues about its direction in the upcoming session. Bitcoin appeared trapped inside the range defined by two of its crucial moving averages and in doing so, the cryptocurrency testing the 50-period moving average as the resistance and the 200-period moving average support.

Bouncing from the 200-MA pushed BTC/USD towards the 50-MA for another bullish breakout attempt but the higher selling pressure near the latter wave kept the prices from increasing which showed the traders’ resilience that could have something to do with unfavorable macroeconomic climate. Traders limited their bids near the local pair as BTC formed a new positive correction on the US stock market against the prospect of rising US Treasury yields as both markets crashed last week with the bond market sell-off raising more questions about whether low-interest rates will continue longer.

Yields that rise when bonds fall rallied as a response to the expectations of faster US Economic growth that was led by a faster vaccination program and inflation expectations. The yield was flat but then surged in the previous session to 1.547 percent. The BTC bearish correction stops as the US dollar benefited from the global market uncertainty. A Ph.D. economist at software firm Automatic Data Processing Inc Nela Richardson said:

“As we reopen the economy, inch-by-inch, that will unleash consumer spending and drive job growth, especially industries that have been most severely affected by the pandemic.”

Week Ahead: Dollar rally continues as US yields rise