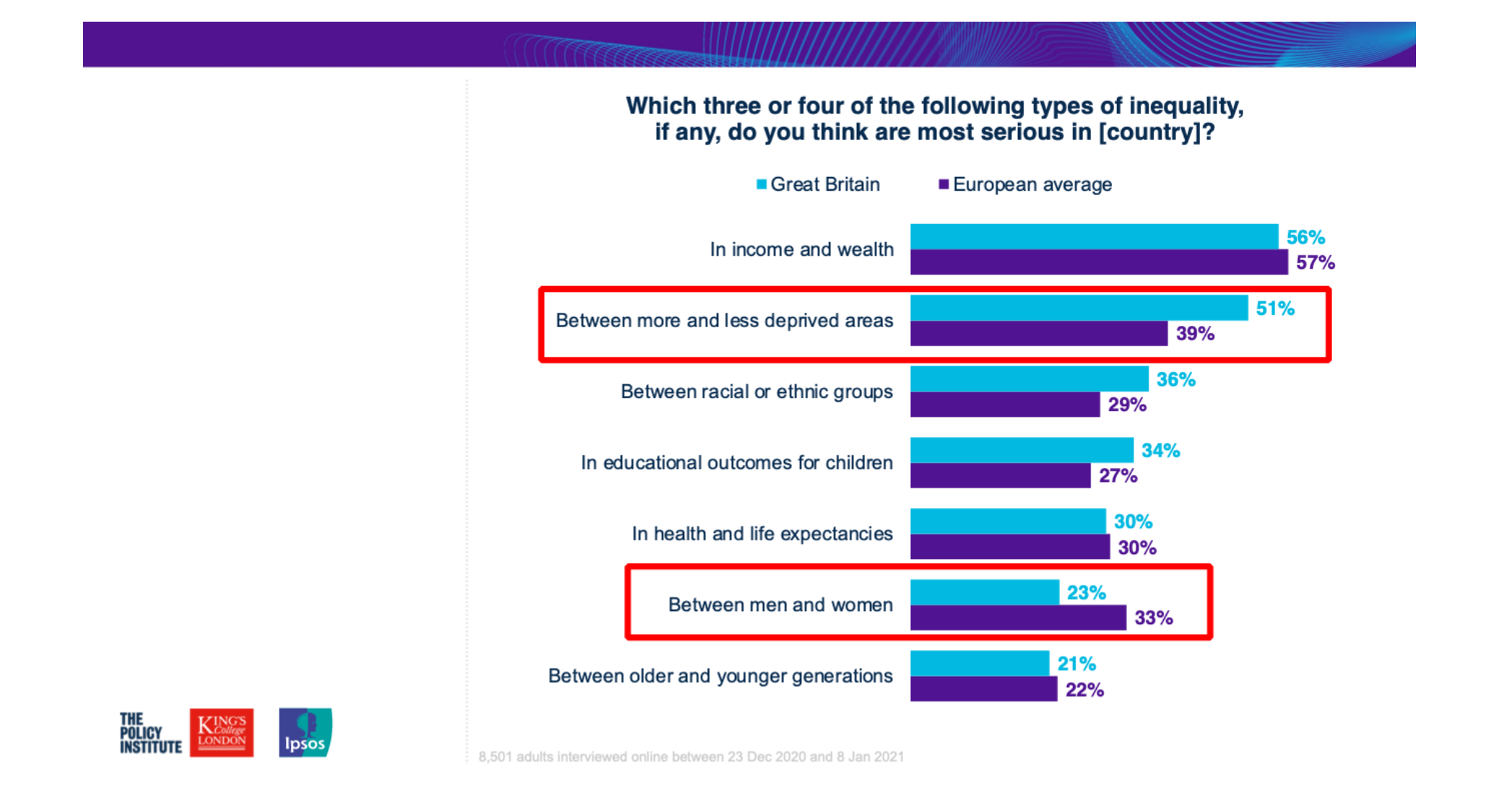 The end of lockdowns is in sight but the road out of these restrictions is only the start of a much longer journey to a full recovery from the pandemic.

The crisis has ruthlessly exposed how our vulnerability to shocks varies hugely. The extent to which our lives have been altered by the experiences of the past year is determined by a complex web of existing inequalities – across genders, age groups, races, income levels, social classes and places.

In this context, it’s vital to understand which types of inequalities Britons see as most pressing. Public perceptions not only help shape political and policy responses, they are also vital to our overall faith in the political and economic system. Getting our focus wrong now could have serious long-term implications.

In a 28-country study, the Policy Institute at King’s College London and Ipsos MORI looked at what the British public thinks are the most serious forms of inequality today, against the backdrop of COVID, and how opinions compare with those in other nations.

We found that Britons are unusually focused on inequalities between areas in Britain. Just over half (51%) say inequalities between more and less deprived areas of the country are one of the most serious types of inequality. This is much higher than the European average of 39% and above any other western European nation. Across Europe, Italy has the next highest level of concern about this issue, on 42%. Meanwhile, only 22% in Germany think this is a serious form of inequality.

There are many possible reasons for this difference. The UK has an unusually centralised state and London-dominated economy, for example. And recent political events – both Brexit and the battle for “red wall” constituencies in the 2019 general election emphasised the importance of geography.

The minds of the general public were focused on areas that have been left or kept behind and that is now showing in the polling. The UK government’s own focus on “levelling-up” may also have shaped views, and it certainly now chimes with public opinion.

But the patterns in the data suggest this is not about a simple north-south divide or just a priority among those directly affected. All groups prioritise area-based inequality. This is rare. It’s much more common for our attitudes towards inequality to deeply divide us.

Of course, area-based life chances are incredibly difficult to shift in practice, as countless previous attempts have shown. If geography is to become a key aspect of the government’s “fight for fairness”, expectations will be very difficult to meet, and will take more than a few targeted funds.

While inequalities based on geography are at least on people’s radar as a cause for concern, gender inequality is much less of a worry. This is another issue on which Britain stands out. On all the other types of inequality we asked about, British opinion is in line with that across Europe – but gender inequality is viewed as a top concern by 33% of Europeans, compared with just 23% of Britons.

In fact, Britain ranks among the lowest internationally for concern about this issue, alongside countries such as China (24%), Hungary (22%) and Saudi Arabia (19%).

At first glance, this may seem justified, as Britain does fairly well on international indices of actual gender inequality. According to the World Economic Forum, in 2020 Britain was ranked as the 21st most gender-equal country.

But it also seems likely that this is complacency. Other countries that rank even higher on objective measures of gender equality are still more concerned than Britain. For example, 42% of people in Spain say it is one of the most serious forms of inequality, despite their country ranking as eighth best in the world for gender equality. And 37% of Swedes say the same – even though their nation comes higher still, ranking fourth globally.

Concern about gender inequality, then, appears to be unrelated to a nation’s actual performance on the issue. This will reflect both variations in the cultural importance of this issue across countries and the recognition among nations that are doing relatively well that there is still a long way to go.

People in Britain don’t seem to have that in mind, despite the burgeoning evidence of widening gender inequalities during the pandemic, with women experiencing higher rates of job loss, being furloughed for longer and spending more time on childcare and home-schooling than men.

Meanwhile, the recent report by the the Commission on Race and Ethnic Disparities has divided opinion about the extent and nature of discrimination faced by ethnic minorities in the UK – but our study shows it remains a priority for many Britons. Racial inequality ranks third in the overall list of the most important inequality types in Britain, picked out by 36%, behind only economic and area-based inequalities. This is significantly higher than in Europe as a whole (29%), and suggests that many of the British public are not complacent about the need to do more.

The aftershock of the pandemic seems set to bring growing inequalities of all types further into the spotlight, and public opinion is vital to understand in this context. Not addressing the issues that people see as most important and most unfair is a sure way to undermine faith in the system overall. But when deciding what to prioritise, we need to interpret public perceptions carefully, neither being led by nor ignoring them.

The US dollar rises slightly after FOMC

Will Wall Street Analysts be Proved Wrong on AMC Stock?

Government-ordered COVID-19 lockdowns are actually unethical, and here’s why