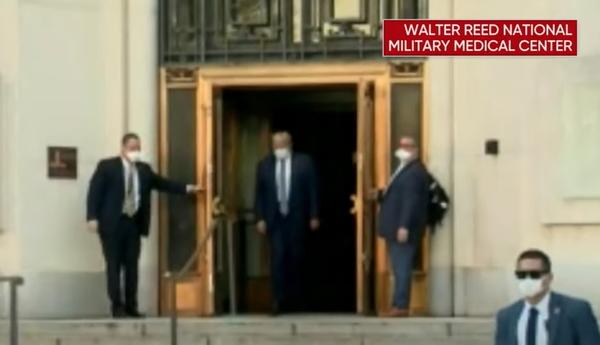 ...who targeted the president?

"I always trust my gut," begins AmericanThinker.com's Sally Zelikovsky, "litigators and trial attorneys tend to do that."

When things don’t make sense or add up but you don’t have a smoking gun, you start nosing around with questioning and investigating to see if your hunch pans out.

Zelikovsky notes that,  obviously, she doesn’t have any proof that the recent COVID-19 infections of POTUS and FLOTUS, several Republican senators, and people working on his campaign and in his administration, are truly random events or something planned, but it doesn’t pass the “random cluster of infections” smell test.  Come on, admit it.  You are all thinking it, too.  I’m sure like me, you spent the weekend texting friends about your suspicions.

The virus appears to have targeted Republicans only and left Democrats unscathed.

Democrats are trying to characterize this as a Rose Garden or debate super spreader -- even though plenty of Democrats and Biden supporters were at the debate and likely interacted with Republicans after the Amy Coney Barrett ceremony.  They argue that, as avid wearers of the mask, they are shielded from Republicans bearing COVID.  But if masks were ironclad, we’d all be immune.  People can still contract the disease in spite of masks, handwashing, and social distancing -- which are only preventive measures that minimize risk. It is odd that in a town as small as Washington, D.C., only Republicans took the hit.

The timing is a second factor.

Key Republicans fell ill after the Barrett announcement,  the debate, and Comey’s flaccid testimony, and now we are full-blown into October -- the final leg of the campaign.  We have Radcliffe’s damning evidence that Obama, Comey and Brennan were aware of Hillary Clinton’s intent to frame Trump of colluding with Russia and, suddenly, Andy McCabe cannot do a Zoom appearance in the Senate under the pretext of fearing for his family’s safety from contracting COVID.  Schumer, on cue, demands the cancellation of the Barrett hearings -- all or part of which can be done remotely to prevent COVID spread.  Moreover, Hidin’ Biden comes out of seclusion and hops on more planes in the last few days flying to Michigan and Florida than he has flown for most of September when he made a only few local appearances in Delaware and Pennsylvania, flew to Cleveland for the debate, called lids on half the days in September, and did a post-debate lame train tour where he interacted with few supporters.

Yet Donald Trump who, up until contracting the WuFlu, was doing back-to-back rallies in battleground states with overwhelming support from adoring audiences in the thousands, is suddenly relegated to Biden-style videos, seclusion, and waving from cars.  This is like being in a cage for someone who is as gregarious and loves interacting with Americans  as Trump.  One would think that Biden, at his age and with his vulnerabilities, would be even more cautious and reluctant to travel and interact with voters in the last weeks of the campaign -- especially after a potentially close encounter with the virus during the debates and seeing what it did to the President.  And yet, as soon as Trump is sidelined, Biden is  hopping on planes without a care in the world.

Finally, there is the fact that the most protected man in the universe, who has insisted on serving and interacting with the people despite the pandemic, refused to hover in an isolated bunker and managed to escape infection for seven months, suddenly gets a direct hit… again, in the final weeks of his campaign.  Interrupting the one thing the Biden campaign cannot generate:  a succession of popular rallies.  We know the transmission could have resulted from a lapse in procedure, after all, those who protect and interact with the President are only human.  But in an administration where enemies are constantly undermining the President, it doesn’t strain an iota of credulity to wonder if those same nefarious forces didn’t weaponize the virus and directly expose the president to it or use someone like Hope Hicks as a COVID bullet.

They’ve tried to impeach and remove him, force him to resign, discredit him, undermine his accomplishments, embarrass and ridicule him; they’ve wished him dead umpteen times; they’ve relentlessly threatened his life; and they’ve been clear they don’t care about his family or his health.  Why not use the virus further to their advantage? While his security detail is adept at thwarting plots involving cars, guns, planes, bombs, and other visible weapons, there are myriad ways a virus can find its way to our president and other administration officials.  And, after seven months, it did.  A month before the election as he was ramping up his very successful airport hangar rallies.   It's too perfect to be mere happenstance.

With a little contact tracing and sleuthing, I wouldn’t be surprised if we find out this was an arrow in someone’s quiver and a doozy of an October surprise.