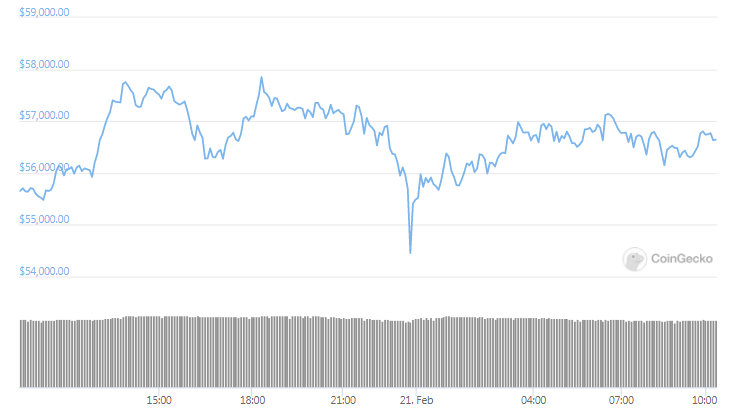 A kilogram of gold is now less expensive than one Bitcoin at a price of $57,705 and with no signs of stopping so let’s take a look at the Bitcoin analysis today.

A single BTC is now worth more than a bar of gold which launches the debate for BTC as a store of value once again. The price of gold won’t move any time sooner but with BTC, you could expect another surge. A Twitter debate with Peter Schiff and Elon Musk launched discussing both gold and BTC and Musk said “you might as well have crypto.”

Musk is known for market-moving tweets in the crypto space but his Twitter pumping powers are now stronger than ever. You could as well have a BTC over a bar of gold if you are willing to preserve your value. BTC hit an apex of $57,634 surpassing the price calculated for a kilo of gold as per the charts on Tradingview. The price for a kilogram of gold is now cheaper than one BTC especially since now the coin is at a new high. Last summer, the value of the US dollar dropped dramatically because of the COVID measures with the US FED printing an unprecedented amount of money so while the statistics show that the inflation rate of 1% and the cost of living and the price of the goods and services surging dramatically during the pandemic.

Around that time, both gold and BTC went up so on July 1 a kilo of gold was $57,093 while by August it hit $65,477. In the same time, BTC skyrocketed to $12,034 in August and with the world’s reserve currency ailing, the investors are now getting more drawn to BTC as a hedge against inflation. The price of gold declined since but it was more or less stable. The real mover here was BTC which is up by five times since then.

As reported earlier, Bitcoin’s price is at an all-time high and gold was not able to keep up the pace. Gold’s value compared to BTC is at an all-time low. The gold to BTC ratio is at an all-time low which means that the price relative to the cryptocurrency is at its lowest point since BTC was created. That’s mostly due to the ongoing bull run for BTC as it now took 29.63 ounces of gold to buy one single BTC while back in December 2017, the number was 14 ounces.