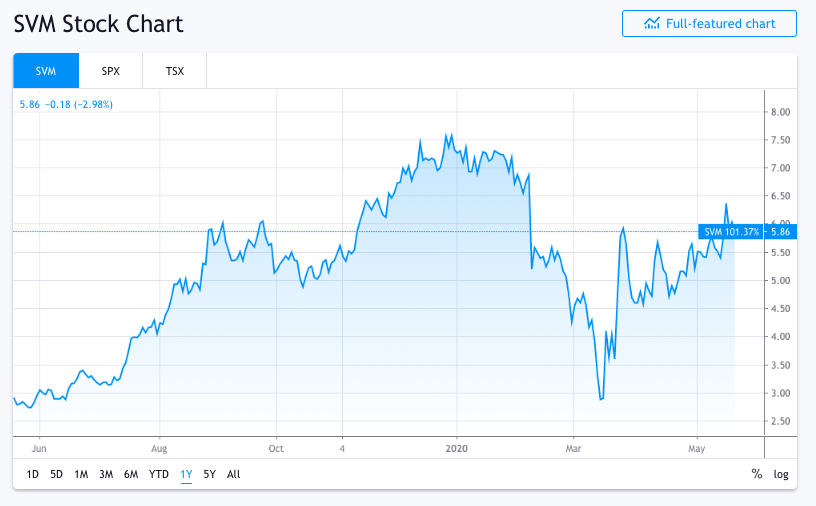 The gold-silver price ratio has come down from previous highs, putting the spotlight on the silver market and making silver penny stocks an attractive investment.

After a tough first quarter, silver prices are starting to catch up with gold and could outperform the yellow metal for the next few years, according to Brien Lundin of the Gold Newsletter.

Of course, Lundin isn’t the only market expert who’s bullish on silver. Analysts from CIBC expect silver to reach $18 this year and $19 the following year, while RJO Futures senior commodities broker Bob Haberkorn sees it reaching $20 in the coming weeks.

It’s clear that the silver market is getting a ton of attention, and investors are likely to follow once they catch on to how much of a bargain silver is selling for right now.

Although the gold-silver ratio has dropped from an unprecedented 127:1, it’s still astronomically higher than ever before, signaling a potential reset.

For those interested in the silver market, here are three promising silver penny stocks that could offer major upside.

Profitable Canadian mining company Silvercorp Metals Inc. has continued to make the headlines in recent weeks and is definitely one of the top silver penny stocks to watch right now.

Although SVM stock had a rough first quarter, much like the price of silver, the company is recovering from previous lows after an exciting M&A announcement in April.

On April 27, Silvercorp announced that it had signed a definitive agreement to acquire Guyana Goldfields Inc. (TSX:GUY) and create a diversified precious metals producer with two profitable underground silver mining operations in China and a gold mining operation in Guyana with a strong balance sheet to fund growth opportunities.

Earlier this week, the company announced an amending agreement that valued Guyana Goldfields much higher after Gran Colombia Gold (TSX:GCM) and Gold X made an unsolicited all-stock proposal to acquire the company.

Under the new terms, Guyana Goldfields shareholders will now receive CA$0.25 in cash for each share held and 0.1849 of a Silvercorp common share for a total of CA$1.30 per share. The improved offer values GUY at roughly CA$227 million, more than double the initial CA$105 million offer.

It’s clear that Silvercorp is willing to dish out the extra cash for the company’s promising asset and has the means to back it up.

Despite being forced to shutter its China operations temporarily due to COVID-19, SVM was able to achieve its full-year production target of 6.3 million ounces of silver, which was 3% above the company’s fiscal 2020 guidance.

Silvercorp is focused on its flagship Ying project in the Henan Province, which was acquired in March 2004 and started commercial production in April 2006, and the GC mine in Guangdong province.

Last year, an updated report for the GC mine revealed a 42% increase in the measured and indicated categories resources to 9.1 million tons. The resources contain approximately 24.5 million ounces of silver, 233 million pounds of lead, and 564 million pounds of zinc.

If the acquisition of Guyana Goldfields goes through, Silvercorp will also add the Aurora Gold Mine to its roster. Aurora, which reached commercial production on January 1, 2016, has a measured and indicated resource of 37.5 million tons grading 3.15 grams per ton (g/t) of gold.

Next on the list of hot silver penny stocks to watch it Fortuna Silver Mines Inc., a precious metals producer with gold and silver projects across Latin America.

Despite facing a series of unfortunate events in the first quarter that led to a net loss of $2.2 million, Fortuna Silver reported a six-fold increase in its free cash flow to $14.2 million from the previous year.

“In the month of May, we look forward to a gradual resumption of operations at San Jose and the re-commencement of construction at Lindero,”  said Fortuna Silver Mines President and CEO Jorge A Ganoza. “We have developed plans for, and are prepared to operate in the new COVID-19 business environment. Measures include aggressive opex and capex reductions of $23 million for 2020. The recently announced financing will provide the Company with the necessary financial flexibility to bring our Lindero gold mine into production at a time of unprecedented uncertainty.”

The financing Ganoza is referring to is a recently closed bought deal equity offering. Fortuna Silver issued 23,000,000 common shares at a price of $3.00 per share for gross proceeds to $69 million and includes the exercise, in full, of the over-allotment option of an additional 3,000,000 shares.

On May 15, Canaccord Genuity analyst Dalton Baretto reiterated a “buy” rating for the company and set a 12-month price target of CA$6.00, which is now just pennies above its current price of CA$5.98. Meanwhile, CIBC has offered a “neutral” rating but has boosted its 12-month price target for FVI stock to CA$6.50.

Another silver miner that hasn’t let COVID-19 setbacks hinder its progress is Great Panther Mining, an intermediate gold and silver mining and exploration company with projects in Brazil and Mexico.

Great Panther’s operations include its Tucano Gold Mine in Brazil and the Topia Mine and Guanajuato Mine Complex, comprising the San Ignacio and Guanajuato mines, in Mexico.

Despite the setbacks in production as a result of the pandemic, Great Panther reported a 11% year-over-year increase in its silver production, which reached an output of 393,000 equivalent ounces.

The company also saw a whopping 134% year-over-year increase in its Q1 gold production to 35,000 gold equivalent ounces, which was driven by a full 2020 quarter of Tucano mine production along with operational improvements.

On top of that, Great Panther raised $16.1 million through a recently closed bought deal financing, further strengthening its cash position of $37 million at the end 2019.

At the end of day Thursday, GPL stock closed at $0.40 but rebounded in after-hours trading to $0.42. However, analysts expect the stock to go much higher.

Cantor Fitzgerald analyst Matthew O’Keefe has offered Great Panther a “buy” rating and a 12-month price target of $1.10, which indicates a potential upside of 38%.

The gold-silver price ratio is dropping, and it’s becoming clear to market watchers that silver is headed for big things this year. Investors who want to get in on the action may want to consider adding one of these hot silver penny stocks to their portfolio.

Are there any silver penny stocks on your radar lately? Tell us about them in the comments!